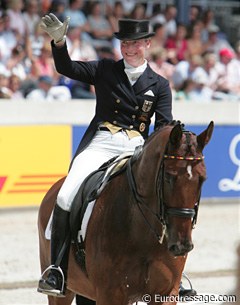 The FEI Tribunal has come to a verdict in the positive doping case of Isabell Werth's Whisper. The sentence is a six month suspension from all competitions.

The official sentence started with the provisional suspension on 23rd June 2009 and will last till 22nd December 2009.

The suspension will become active if the rider chooses not to appeal at the Court of Arbitration for Sport (CAS). Werth has thirty days to appeal. She will also need to pay a penalty of 3,500 Swiss Francs.

"The sentence is as strict as in similar cases. It concerns a doping case and it is logical that we accept this verdict," said Sönke Lauterbach, secretary general of the German Equestrian Federation.

Isabell Werth commented, "I'm happy the verdict is finally there. Now I can look forward to my baby and concentrate on my pregnancy."

On 30th May 2009, Isabell Werth's Hanoverian gelding Whisper tested positive to the doping substance Fluphenazine, which her vet Dr. Stihl had administered to Whisper for his Shivering Syndrome. Werth had a hearing with the FEI Tribunal on 25th June 2009.

The FEI published the following statement:

A panel of the Fédération Equestre Internationale (FEI) Tribunal has taken its decision in the Equine Anti-Doing and Medication Control Rule case involving the horse Whisper 156 ridden by Isabell Werth (GER). Consistent with the FEI’s strict liability approach to anti-doping rule violations, the panel has found Isabell Werth responsible for the doping of her horse Whisper 156 at CDI 4* Wiesbaden (GER) on 29 May 2009 and has suspended her from FEI competition for a period of six (6) months until 22 December 2009. Isabell Werth is also fined CHF 1,500 and ordered to pay CHF 2,000 to cover the legal costs of the Tribunal proceedings. Isabell Werth has 30 days to appeal this decision to the Court of Arbitration for Sport (CAS)