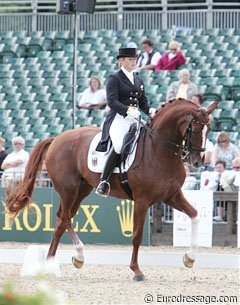 The morning session of the Grand Prix Special featuring the first fifteen riders of a qualified thirty started out under an overcast, eerie sky. But round 10.30h the sun came through and the weather turned out to be quite enjoyable.

German Ellen Schulten-Baumer took the provisional lead in the Grand Prix Special. The class has its own set of medals but also counts as a qualifier for the Kur to Music. The top fifteen ranked riders, with a maximum of three per country, will get the opportunity to ride for a kur medal on Saturday evening.

Schulten-Baumer and Uwe Schulten-Baumer's chestnut Hanoverian mare Donatha S (by Donnerhall) had a very solid ride with smooth piaffe-passage transitions, a relaxed and ground covering extended walk. The mare was steady in the hand, especially in the trot work. A few mistakes crept into the canter work. The tempi changes were carried but a bit downhill. By the end of the ride Donatha S lost her relaxation and ground her teeth again. They scored 70.917% taking them into the lead at the moment. 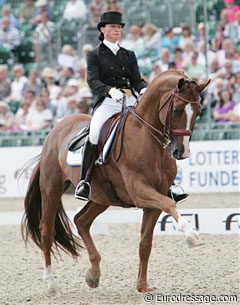 Swedish Minna Telde and her Hanoverian licensed stallion Don Charly (by Don Gregory) have much in store to score in the low seventies, but mistakes disrupted a steady flow of 7s and 8s. Don Charly broke into canter in the extended trot and the trot-canter transition was difficult. The trot half passes were lovely though as the chestnut stallion has incredible scope in his front leg. Telde was visibly half-halting with her hands which interfered with the otherwise harmonious silhouette. The canter half passes were nice, but Don Charly made a short change behind at B. There were problems in the two tempi changes as well, but the score stayed high. The final piaffe-passage centerline was good. They finished on 69.958%

Russian Alexandra Korelova and her 19-year old Balagur showed off their signature 10 scoring piaffe but were unable to clear some of the other movements. 69.125%

Britain's fourth rider Maria Eilberg and her Westfalian Two Sox (by Ehrentush) scored a good 68.833%. The bay gelding is quite stiff in the body and steep in the shoulder, but he has much cadence and nice push from behind so his piaffe and passage are lovely. 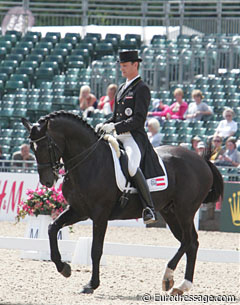 Austrian Peter Gmoser and the Oldenburg branded Cointreau (by Canaster x Figaro) posted a score of 68.833%. The black stallion sits well in piaffe and the passage is rhythmical but his rider is interfering much with the smooth appearance. His hands are very unsteady and the horse opens is mouth and doesn't chew the bit. In trot Cointreau lacks swing over the back and he loses his balance and uphill tendency. The two tempi's were lovely but Gmoser is rocking in the saddle with each change. A mistake in the one tempi's on the centerline kept the score from climbing to 70%

Danish Sune Hansen scored 68.292%. His horse broke into canter after the first halt on the centerline and there was loss of rhythm in the extended trot. The passage were lovely and this pair can really grow into a combination in the future.

Swiss Marcela Krinke-Susmelj and her Oldenburg gelding Corinth (by Cheenook x Fumiro) received 67.583% from the panel of judges.

Juan Manual Munoz Diaz on Fuego. This is a Spanish horse! Look at the trot.