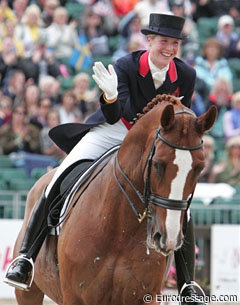 What an amazing level of competition in the Team Championship test here at the European Championships in Windsor. And the best Germans are not even here!!

By noon time, the team competition has absolutely reached a boiling point with so many amazing rides and Totilas, Digby, Lancet and Whisper are still to come!!

The show definitely has gone different than prognosticated with Adelinde still in the lead but now followed by Laura Bechtolsheimer, Mattias Alexander Rath and then Anky van Grunsven ahead of Imke Schellekens-Bartels.

There is a noon break now and two more groups of seven riders have to compete. Holland is untouchable for gold, but the battle for silver and bronze is definitely on between Germany and Great Britain at the moment. Denmark and Sweden are also strong contenders for one of the top five places. 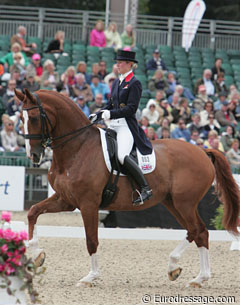 Bechtolsheimer had a stunning ride and while the scores were flashing on the running score board one wondered why the judges didn't throw the same kind of points at her as they did with Parzival. Laura's Mistral Hojris shows even more relaxation in piaffe and passage but Bechtolsheimer is struggling to get 9s from the panel, while Cornelissen easily got those high scores for it. And Laura should too! The British duo had one big booboo in the single tempi changes and without that mistake the score could have been higher than the 76.638% they received today.

Aboard her massive Danish warmblood gelding Mistral (by Michellino) Laura rode a strong trot and piaffe-passage tour. The extensions were big and the first piaffe and passage was simply amazing. The second passage was a tiny bit crooked but the horse keeps the rhythm so well at all times and appears relaxed in the movement and light in the hand. The canter was great as well. A well controlled zig zag (though Mistal got a tiny bit deep there), a fantastic extension and gigantic two tempi's. In the one tempi's he lacked forwardness and made a mistake. The tiny pirouette right was beautiful. A small mistake in the rhythm in the final trot extension followed. The piaffe passage centerline should have scored solid 9s but the pair got scores ranging from 7 to 9. 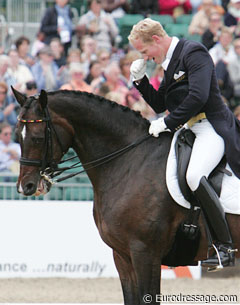 There was much pressure on the shoulders of German Mattias Alexander Rath. He's one of Germany's power house scoring riders if his horse keeps the lid on the cooker. Ann Kathrin Linsenhoff's Sterntaler always appears in the ring as a risk to ride, but Rath did a super job today and saved the day for Germany, which has struggled so hard these past few months to muster a team. No blow ups in the piaffe and generally a fault free ride deservedly put him in a provisional third place with 75.617%

The 25-year old Rath showed a super first trot extension and safe second one with Sterntaler. The trot half passes were good, but could have been a bit smoother as the contact with the bit was not always steady. The first passage was good, but the first piaffe was ridden very safely. The succeeding extended walk is breathtaking. Then the second part of piaffe-passage happened and this was just lovely: nice in rhythm, light, well controlled. The highlight of the canter tour were the huge, ground covering tempi changes. 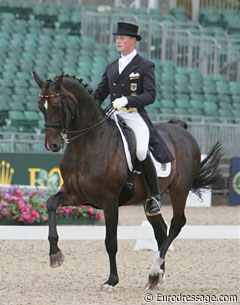 The critical point in each of Sterntaler's tests is the final piaffe-passage centerline, especially with the piaffe at X. This time, Rath braved his horse's problem and rode the required steps even though Sterntaler tried to get away with less. The last bit of passage was uneven as Rath had some problems controlling the steps but nevertheless it was a job well done. The blond German sighed in relief and raised his fist in the air. This was his big accomplishment!

The world's most succesful dressage rider ever, Anky van Grunsven, once again showed her amazing riding skills today aboard her Olympic gold medal winning Salinero. She has such a great control over the tempi of her horse. The entire ride it looked like Anky had to calm down her dark bay Hanoverian gelding and while other riders sometimes clearly have "the brake" on, with Anky it is much more subtle. The horse did not show off his best abilities today and made several mistakes. This resulted in a 73.872% score. However, it's not the first time that the Grand Prix doesn't work out as hoped for, but with Van Grunsven that doesn't mean a thing. She always comes back with a (positive) vengeance and usually improves to the maximum by the end of the competition. 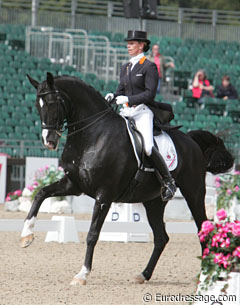 Salinero looked fresh and eager to work.. a bit too eager as the first halt was not immobile. He then shortly broke into canter on the centerline in the collected trot, but Anky responded quickly and had her horse back in the right tempo and frame. The first extended trot was spectacular but should have more ground cover, same with the second and last one which was more up and down than forward). The trot half passes were magnificent as was the first piaffe and passage with flawless transitions.

The extended walk was a bit tense but under control. In canter the two tempi's were good but they started out a bit crooked. The one tempi's started a bit croup high but were very nice nevertheless. Also the zig zag looked absolutely great, but at the end on the centerline Salinero made a double change which cost them many points. The extended canter was uphill and big. The pirouette left was good, but in the right one there was a slight loss of impulsion. 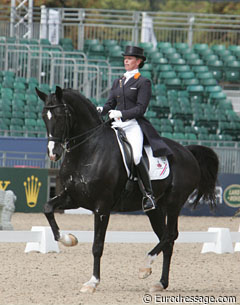 On the final piaffe-passage centerline the first passage could have been a bit more forward. The piaffe at X was phenomenal and so was the final passage. Unfortunately Salinero piaffed his way through the final halt which pushed the score down considerably as that only earned them marks between 2 and 4.

Van Grunsven was absolutely right when she commented the following: "the way he went was good and we have to be honest that we showed many good things. The mistakes that we made were a result of Salinero being too eager. Unfortunately it was cold and windy today instead of thirty degrees. I know from experience that Salinero needs to acclimatise and grow into the competition. It was like this in the past, so why would it be different now?" 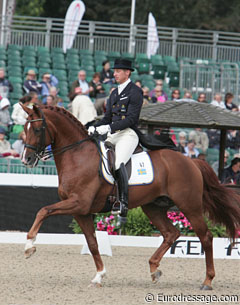 Swedish Patrik Kittel settled in on a provisional sixth place behind Imke Schellekens-Bartels. Aboard the Dutch warmblood licensed stallion Scandic (by Solos Carex), he scored 72.255%. It was such a relief to finally see the chestnut stallion chew on the bit and foam in his mouth. Previously, the contact was the biggest issue with this horse. The nose band was always extremely tight, the tongue blue and no movement in the mouth whatsoever. Boy, this time that was different! Kittel and Scandic had a lovely ride with the piaffe and passage as absolute highpoint. All pi-pa's were of the highest level, smooth in rhythm, off the ground and with power.

Small issues arose in the canter work. Scandic goes a bit deep there and loses the uphill tendency. In the two tempi's the rider's aids were too visible and in the one tempi's he became a bit tight in the neck and deep. Same goes for the zig zag. In priciple, the movement was well executed, but one change was a bit short behind and the horse got a bit deep. The first and last extended trot were awe inspiring: off the ground and ground covering. They scored 72.255% 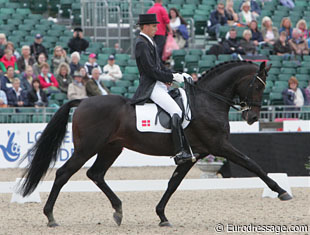 Andreas Helgstrand and Tannenhof's Carabas. They were looking at their best today. There is much more regularity in the passage and the horse looks more relaxed and settled in his work. The tempi changes were superb! Only the contact still needs to get lighter. It was their fourth international competition as a combination. They scored 70.809%

Alexandra Korelova on her 19-year old Balagur. Their halt was not immobile but two judges still scored it 7. The horse has been in better form. In passage he seemed to break down in two pieces, even though his piaffe is still the best on the circuit.