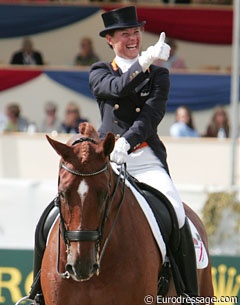 The question has changed. It is no longer "with what score will Edward Gal and Totilas win the Grand Prix at the 2009 European Dressage Championships?" but it has become "will Edward and Totilas beat Cornelissen on Parzival?"

What a phenomenal ride did Adelinde Cornelissen produce today in the Grand Prix part I, the first leg of the Team Championship at the 2009 European Dressage Championships in Windsor, Great Britain.

The combination entered the ring with much self confidence and had a perfect halt. It was immediately apparant that the judges were going to throw points at this pair, as their entry already earned them four 9s and one 8. Other combinations had also entered the ring with the same brio but struggled to get an 8 for their opening exercise. A fantastic extended trot followed, though the collected trot before the extension was too "passagey". The half passes were great and Parzival (by Jazz) always maintained an uphill frame with the head at the vertical and the poll as highest point. 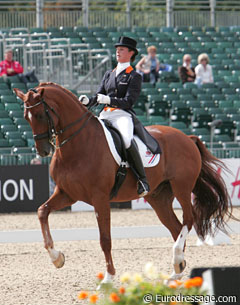 At times the rider does lean a bit too much into the contact with the bit but it looks soft most of the time. The piaffe and passage are breath-taking: such an amount of power, elasticity, suspension and suppleness. It's simply "wow". The 29-year old Cornelissen has amazing tempo control of her horse and Parzival can keep the rhythm in piaffe and passage so well. The duo lost some points in the canter work. The tempi changes were good. They were straight in the body and ground covering, but the zig zag was sloppy and once Parzival changed behind. They finished on a score of 80.638% but there could have been more if they had been more accurate in the canter.

Parzival's amazingly high Grand Prix score is totally thrilling as it means that the horse can challenge his team mate Totilas, which was believed to be unbeatable. Tomorrow, Gal will have to prove his worth and see if he can continue to be the revellation of 2009. Though the level of competition today was not staggeringly high, the top rides were exciting and tomorrow the game will definetely be on. Unless a meteorite crashes into the Windsor show ring during a Dutch ride, it is almost certain that Holland will win team gold with a historic team record score. Yet so far it is undecided who will get silver and bronze: Germany, Denmark, England and even Sweden are in the running! 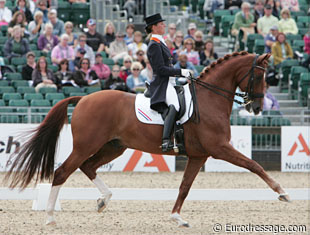 Cornelissen has always been the bridesmaid at the big events. She was the reserve Dutch team member at the Olympics in Hong Kong and couldn't participate in the 2008 World Cup Finals in Las Vegas because her horse sustained an injury there. Parzival has recovered from the suspensory he suffered in Vegas and came out in Hickstead last month to finish second behind Gal and Totilas.

"He was so relaxed there and actually the break probably did him a lot of good - and today - I'm so happy he showed what he can do!" she said. 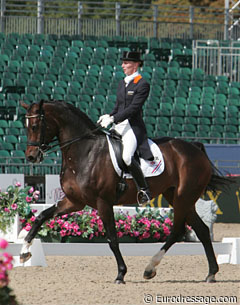 The Dutch are off to a flying start as Imke Schellekens-Bartels and the Smarius family's Sunrise (by Singular Joter x Werther) finished second on 73.149%. The halt at entry was not entirely immobile so the judges seemed confused as three still scored it a 7. It seemed like the pair needed to get in the rhythm of things with the first half pass right lacking a bit of bending, but the left half pass was an improvement. The second trot extension was great at the beginning with much ground cover, but slowed down at the end of the diagonal. The final trot extension was super. Imke seemed to have played it really safely and never pushed her mare. Though her swooshing tail is a constant distraction from the harmonious image, the piaffe and passage looked solid and clean. A bit more impulsion in piaffe would have boosted the score. The passage was rhythmical and regular but the hind legs should step more under. The canter started very confidently with ground covering, straight two tempi's and a very forward extension. 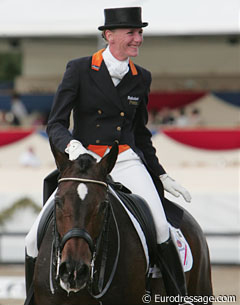 In the zig zag the hind legs blocked behind in one flying change to the left and the succeeding one tempi's also caused a problem with the changes to the left. This big mistake cost a lot of points, though judge Markowksi didn't notice the error and still scored it a 9 (at least on the running score board as this mark could have been corrected afterwards. editor's note: Markowski did score it 9. He was looking at Sunrise's on the diagonal going away from him, so he didn't see the missed change). One only knows if you were to look at Imke's score sheet). The contact with the bit, which has been a problem last year, has vaporized. Sunrise was nicely on the bit and the contact was soft and light at all times.

"I got the most out of her," Imke said at an informal press conference after the test. "I made a mistake in the ones but overall I rode my test at an optimal level." 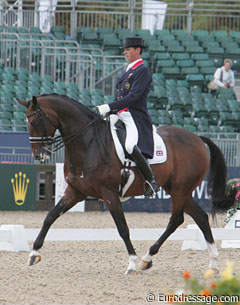 Not a German rider finished third, but British home favourite Carl Hester succeeded the two Dutch ladies in the ranking, much to his own surprise. Aboard Donald McTaggert's Holsteiner gelding Liebling II, Hester rode a very smooth, correct test. He was generously marked but Carl did prove his worth on the dark bay gelding, who lacks some flash and pizzaz in comparison to Parzival for instance.

Nevertheless, correct riding prevailed especially in the trot and piaffe and passage. The horse did fall apart a bit in canter lacking closure in the frame in the zig zag, which also led to a mistake in the one tempi's. The final pi-pa centerline was lovely and the crowds burst into cheering and applause when Hester saluted. The judges were unanimous in their marking and gave him an overall of 72.085% 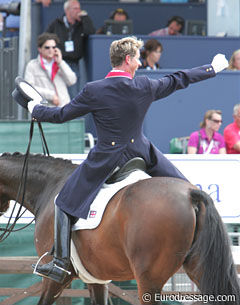 Hester admitted however that although his 12 year old bay Liebling gave it everything he cannot produce the superbly athletic movements that come so much more easily to the Dutch-team horses.  He told FEI press officier Olivia Robinson: "My horse is a £10,000 show jumper bought at a sale - he tried his hardest today and I'm really happy with him" he commented.  He has only been riding the horse for 10 months and this is just their fifth international show together.  He took Liebling to Saumur just three weeks after the horse came to his yard and won there "but our form was a bit up and down" until they went to Aachen this summer where the partnership really began to gel.  "I took three weeks out of my usual schedule before Aachen and went to Denmark to train with my friend, Anne Van Olst, and it really paid off" he explained.

Hester also admitted to getting into a bit of a training frenzy before these Championships at Windsor. "I was so stressed, so I talked to our team manager Richard Davison and to my vet and they both told me the same thing - take a break!". He left Liebling off work for three days and then, today, came out and delivered their best ever result. 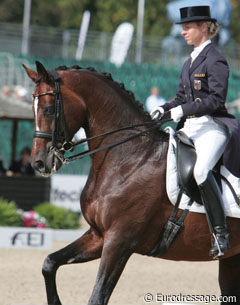 Susanne Lebek and her 14-year old Bavarian bred gelding Potomac (by Prince Orac xx x Wenzel) were the best German pair so far. The piaffe and passage were very suspended and ok in rhythm but there was much tension throughout the ride. Potomac pushed himself high, especially in the passage and in collected walk the clarity of rhythm was lost. The zig zag was gorgeous and the final passage on the centerline was probably the highlight of the test. They scored 71.277% to finish fourth provisionally. 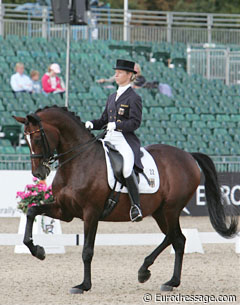 "I'm super happy that Potomac was with me," Lebek commented afterwards. "I was the first rider to go for Germany so I was quite nervous, but I dealt with it. I needed a second try to get the one tempi's going and had a few problems with the second pirouette. But I'm sure that we can have a more relaxed ride in the Grand Prix Special and I'm optimistic that it will go even better than today."

Ellen Schulten-Baumer barely made it for the Europeans. She crashed from a youngster two weeks ago, sustaining a concussion and an injured neck, but she made sure she was ready on time for Windsor. Aboard Donatha S (by Donnerhall), Schulten Baumer scored 70.638%. There was a loss in rhythm in the first trot extension, the second was better. The piaffe and passage were solid, but the chestnut mare's discontent grew in the canter tour.

The tempi changes were with the hand brake on, there was a hiccup in the zig zag and Donatha S consistently ground her teeth.

"She went well," Schulten Baumer said, "but in the zig zag she already seemed to be thinking of the pirouette. The Dutch will certainly get the gold and are unbeatable, but the battle for silver and bronze is completely open." 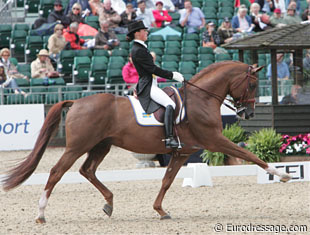 Swedish Minna Telde and Don Charly (by Don Gregory) were on their way to score a solid 72% but mistakes in the one tempi's made the score drop to a final 69.957%. The test started out a bit rocky with rhythm mistakes in the first trot extension and half pass right, but the extended canter was excellent. Don Charly regularly leaned on his rider's hand and toppled his head in the second trot extension and one tempi's. The chestnut stallion has lovely gaits and looked fresh and willing. He'll definitely be back for the Special.

The best Danish ride of the day was Anne van Olst's go on Clearwater (by Carpaccio x Limebrand). They had to ride in the rain but that didn't dampened their spirit. Super passage work helped the final score to stop on 69.404%, a seventh place provisionally

Sune Hansen made his debut on the Danish team and scored 68.043% to finish eigth. His horse Gredstedgards Casmir (by Continue) is a stunning horse, but the pair lacked a bit of harmony. Especially in trot and piaffe the horse could have been more closed in the frame and swinging over the back. In canter there was a loss of impulsion which caused the two tempi's to lack ground cover and the zig zag to be on the hand and not forward enough. The passage, however, is superb.