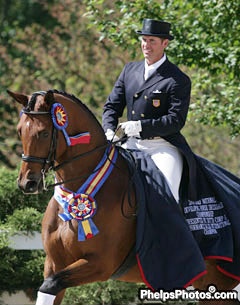 Cabana Boy and Christopher Hickey won the 2009 U.S. Developing Horse Championships to pull off an unprecedented feat in winning two National Championships as a young horse (2007 as a five-year-old, 2008 as a six-year-old) followed by a victory in the Developing Horse division, earning the acclaim of the judges and an overall average of 73.440%

Forty-one year old Hickey won the championship with the U.S. bred Hanoverian Cabana Boy, owned by his employer Hilltop Farm, a combination of two classes both of which the pair won. Cabana Boy is by Contucci out of a Bordeaux mare and was bred by Douglas and Shannon Langer in Wisconsin, not far from where the championships were held at the Lamplight Equestrian Center in Wayne, ILL, Chicago's western suburbs.

In second place was Don Bailey, by Donnerhall out of a Pik Bube mare, ridden by George Williams, 49, of Delaware, Ohio for 68.29 per cent. Don Bailey is owned by Elizabeth Juliano of Gates Mills, Ohio. Third place on 67.47 per cent went to Chicago, by Calido I out of a Corleone mare, and ridden and owned by Heidi Gaian of Hollister, California.

To win the five and six-year-old titles and then the Developing Horse title at age seven was a once in a lifetime achievement for a rider, he said. And for Hilltop Farm owner, Jane McElree, who celebrated her 80th birthday this year, Cabana Boy's success was the "icing on the cake."

Hickey said the nickname for the bay Hanoverian was The Mayor of Hilltop Farm. "He knows everything, is a real busybody. His confidence  of going into the show ring with the attitude that he knows all the people are there to watch him is what makes him a great show horse."

But he said that moving up will be interesting because Cabana Boy has found it easy to perform the work so far. He has found some of the Grand Prix work easy, but is having to focus more than he has in the past on learning piaffe and passage. The pair will compete at Dressage at Devon next month and then take a break. 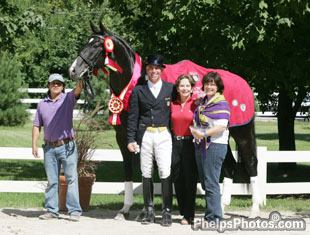 Finishing a strong second in today’s USEF Developing Horse Test (which was worth 60% of the overall average) was “Don Bailey” and George Williams, finishing with an overall average of 68.290%. “This horse loves to show up and compete,” said Williams.  “Yesterday he was a little backed off, but today he was much more energetic and with me.”

Riding for owner Elizabeth Juliano of Ohio, Williams has only worked consistently with Don Bailey since May 1st.  The black Oldenburg gelding (Donnerhall – Pirola by Pik Bube) was bred in Germany by Renate Lange and purchased by Juliano from Performance Sales International in December of 2007.  William trains with longtime friend and mentor Kathy Connelly.

Despite the short time together, Williams says, “We have a certain trust between us.  He’s very athletic and has a strong sense of self.  He definitely has the potential for Grand Prix, and allows me to carry on with my dream of continuing to ride at the top levels of the sport.  I’m thrilled to have been a part of this Developing Horse program.”

Williams joked that Don Bailey would disagree with Cabana Boy's belief that spectators were there to see him because Don knows they are there to watch him.

""He needs to get stronger and the steadiness needs to get better," he said, but he is "very athletic and a little hot at times" though very aware of himself.

"I like his spirit, energy and temperament," he said, and he believes that he and Don Bailey have developed trust in each other.

More coverage on this event on Dressagedaily.com