No Official USEF Role Granted Yet to Thomsen. Gribbons To be All in One Chef 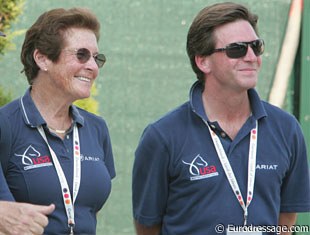 Much confusion has arisen following the news of the appointment of Anne Gribbons as U.S. Chef d'Equipe and Morten Thomsen as "possible" new U.S. team trainer.

Different media published different stories, while the US Equestrian Federation itself had not yet released a statement.

As usual Gil Merrick, Assistant Executive Director of Sport Programs, came to rescue by clarifying the situation. No team trainer has been appointed and Gribbons will be a renaissance woman: chef d'equipe and technical advisor in one.

"The Eligible Athletes Committee conducted the interviews with all three final candidates:  Anne Gribbons, Morten Thomsen and Robert Dover," explained Merrick to Eurodressage.  "The Eligible Athletes made their recommendation to the High Performance Dressage Committee that Anne Gribbons be named as the full time Chef d’Equipe/Technical Advisor – the same position held by George Morris and Mark Phillips for their respective disciplines."

"Ms. Gribbons’ appointment in her new role is subject to both successful contract negotiations with the USEF CEO and the final approval of the USEF Executive Committee," Merrick added.

At this point, no role has been appointed to Danish dressage trainer Morten Thomsen though an official function is not yet ruled out. .

"The Eligible Athletes – after an extremely successful training clinic with Mr. Thomsen in California and a two-hour interview with him in Denver - also requested that the High Performance Dressage Committee negotiate a role with him to assist the US with their ongoing training efforts," Merrick told Eurodressage. "The High Performance Dressage Committee voted to accept both recommendations.  Nothing has been negotiated with Mr. Thomsen and therefore no role has been designed for him at this point. The role and title for Mr. Thomsen are exactly what need to be worked out at this point and discussions will begin next week."