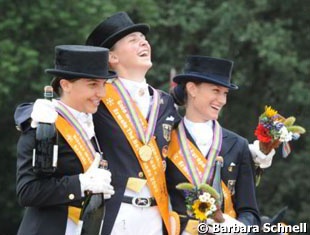 The individual test for Junior Riders was a thrilling competition which ended with all the medals being won by German riders at 2009 European Championships Dressage for Juniors and Young Riders in Ermelo, The Netherlands.

The supremacy of the German Sanneke Rothenberger was overwhelming. Riding Deveraux, she scored a total of 76.062% which is a 4% difference with number two, the German Charlott-Maria Schürmann and World of Dreams with 72.263%. The bronze medal was been won by Louisa Lüttgen and her horse Habitus scoring 71.736%.

Ranks 4, 5 and 6 were for Dutch rider Angela Krooswijk (Roman Nature), the Danish Catherine Dufour (Aithon) and the second Dutch rider, Birgit van der Drift (Twister). The best 15 riders from the individual test will ride their freestyle to music test on Sunday. 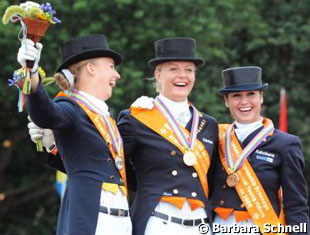 Lotje Schoots was riding Torricelli, a horse she fell for when he was 2 years old. “He was rather ugly at the time”, Lotje laughs, “but he moved in a way that I thought ‘That’s him’”. And indeed, it was the first time that Lotje was riding Torricelli at a European Championship but all of her tests were just great and incredibly harmonious. 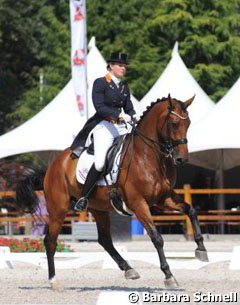 The Dutch judge Ghislain Fouarge resumed: “There was no discussion whatsoever about the three winners of the individual medals. Lotje Schoots was riding her test in utmost concentration. It looked very harmonious and she certainly mastered her nerves. The German Fabienne Lütkemeier was a very close runner-up. Her trot was excellent overall her performance was just a little bit less secure than that of Lotje. Marrigje van Balen was riding a very controlled and harmonious test and certainly earned her bronze medal.”

Photos from the Scene by Barbara Schnell