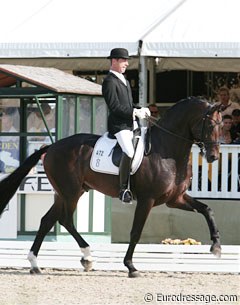 Ulf Möller and Fürst Romancier, the winners of the 5-year old qualification round, finished just outside the podium on a fourth place with 8.74. Though the pair achieved a higher mark in the finals, its performance was less sparkling than in the qualification round. Paul Schockemöhle's Oldenburg stallion (by Fürst Heinrich x Romancier) looked tired and lacked energy and forwardness.

While the trot was incredibly expressive, uphill and engaged in the first round, the horse seemed out of breath and lacked impulsion and push. The contact with the bit was much better now as there was more movement in the mouth and acceptance of the bit. The walk was ground covering. 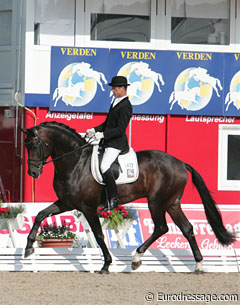 In canter the horse was less uphill and he slowly started to rely more on his rider to be steered through the test. The first simple change was very hesitant and Möller needed a few attempts to get the right strike off. In the left counter canter the horse broke into trot. Möller was able to generate the last bit of energy in the two extended canters, which were big and uphill but the general impression was that this horse was tired and without impulsion.

The judges were still very generous with their marks. Yes, the basic gaits of this horse are very good but they did not come to the right expression in this finals test: 8.9 for trot, 9.3 for walk, 8.8 for canter. The submission was 7.9 and the general impression 8.8. 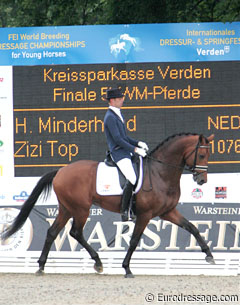 Hans Peter Minderhoud and Zizi Top got a serious score boost from 7.96 in the first round to a very unsparing 8.54 in the finals. Minderhoud presented the Tango x Ferro offspring with much energy and expression. The trot work was considerably better from the first test. He was less hurried in the working trot, though he could have covered more ground and stretched the legs forward instead of upwards in the extensions. The walk had a good overtrack of two hooves but could have been cleared in its rhythm. The walk pirouette was good in its steps but a bit big. In canter Zizi top has good spring and he listened well to the rider's aids, but there was a loss of rhythm in the left counter canter and the final transition to trot was not fluent.

Zizi Top is a beautiful Dutch warmblood stallion with a nice set of movements and a lovely appearance, but he is built squarely and lacks some stretch in his frame and strides. Also, gradually towards the end of the ride, Zizi Top started to open his mouth and show his tongue. The judges, however, were absolutely thrilled by this horse and gave it high scores: 8.9 for trot, 8.7 for walk, 8.2 for canter and submission and 8.7 for general impression. This added up to 8.54 and a fifth place in the ranking. 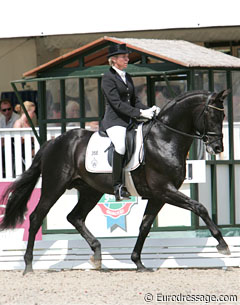 Ingrid Klimke and Jason Wallace' Westfalian stallion Dresden Mann (by Dresemann x Florestan) ranked sixth with 8.28. The horse obtained this high score thanks to Klimke's fantastic riding. Dresden Mann is black and beautiful but he doesn't have that impressive, huge appearance that power house horses have such as Honnerups Driver. In trot the black stallion showed much elasticity and spring off the ground, but he could have tracked up more behind. One step was blocked in the walk pirouette.

In canter the horse should cover more ground, but the simple changes were nice and when he was given the reins in the final trot, the horse stretched into the contact and relaxed fantastically. 8.3 for trot, 7.6 for walk, 8.4 for canter, 8.5 for submission and 8.6 for general impression. 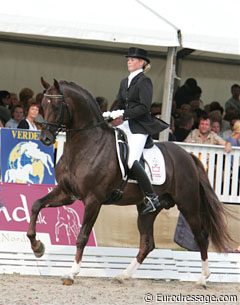 Much was expected from Lotte Skaerbaek and her Danish warmblood stallion Skovens Rafael (by Romanov x Don Schufro, the same bloodline combination as champion Honnerups Driver). Unfortunately, it wasn't really their day. The trot work did not look as powerful and the left hind leg was not tracking up as much as the right. The trot extensions were irregular and not fluent in its lengthening with the horse taking uneven steps behind. He also spooked in one extension. He blocked in the walk pirouette though the medium walk was good in relaxation. The canter, which was breath taking in the first round due to the superbly active hind leg, was not so expressive this time. He made a flying change in both counter canters and Skaerbaek had some problems getting her horse on the right lead again. He scored 8.5 for trot and walk, 8.3 for canter, 7.5 for submission (which was still high considering the unfortunate mistakes) and 8.5 for general impression. The total was 8.26 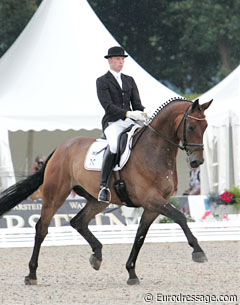 Jan Dirk Giesselmann and his huge Hanoverian gelding Real Dancer (by Rubin Royal x De Niro) stunned everyone with their outstanding trot work. The bay gelding is very strong behind. He moves uphill and nice in the hand and stayed at the vertical at all times. In the extended canter, the horse looses some roundness and tightens his back, but the working canter was smooth. He was able to maintain his balance well in the counter canter. They scored 9.0 for trot, 7.5 for walk, 8.5 for canter, 7.8 for submission and 8.4 for general impression. This led to a 8.24 total score and eight place.

Bad luck for Esther Maruhn and her Hanoverian gelding Watulele (by Wolkenstein II x Frappant). The muscled chestnut, owned by Roland Berwe, saw ghosts in the arena and was more focused on inspecting the ring than responding to his rider. She had to put much effort into making him go round the 20 x 60 m ring and was constantly working the bit with her hands. 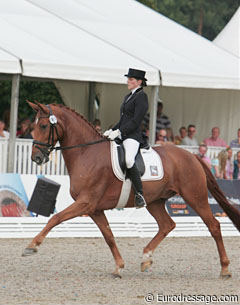 Watulele paddles so much in trot with both front legs even though he tracks up really well behind. He either became too tight in the neck or behind the vertical and was tense in the body in trot. In canter, Watulele improved and showed off his active hind leg. The simple changes were lovely with nice walk bits in it. He achieved 8.2 for trot and walk, 8.5 for canter, 7.7 for submission and 8.4 for general impression. Their total of 8.20 ranked them ninth

Jennifer Sekreve and the Dutch bred Zambuka (by Scandic x Biotop) landed a 12th place with 7.62. The chestnut stallion has nice balanced movements but there were just too many training issues not in order. The horse was not through in the neck, he was against the bit, tilted his head and was stiff in the back. The 7.3. for submission was generous. He scored 7.7 for trot and canter, 7.6 for walk and 7.8 for general impression. Maybe these Championships just came too early in the stallion's training schedule? 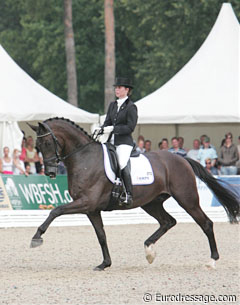 Two year's ago Miranda Rongen won the World Championships with Deveraux OLD. This time she brought Zico (by Riant x Ferro) and finished 11th with 7.78. Zico is a big mover with lots of power, but he needs to have more understep and engagement. The trot was excellent, but he lost expression and power in canter.

The best Dutch horse in the 5-year old finals was Zolena (by Sir Sinclair x Cabochon). This long legged, elegant mare was presented by 17-year old Annerein Kerbert, who just moved from ponies to horses. The mare is super athletic and supple without losing any balance in the bends. Some tension crept into the test in the canter part. The mare broke into trot and lost some engagement in the counter canter. She had already showed tension in the initial halt and Kerbert could not get rid of it in the simple changes. They finished thirteenth with 7.58. 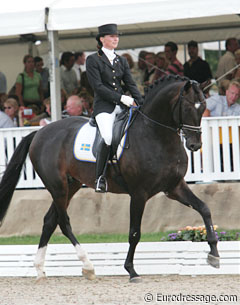 Swedish Minna Telde and the Hanoverian stallion Hohenstaufen II (by Hohenstein x Langata Express). The gorgeous dark bay stallion is slow behind and pushed himself high to avoid proper back usage in trot. The walk was lovely with fluent, big steps. In canter, there was not enough understep from the hind legs and in the extended canter he even pushes his hind legs out instead of under. They scored 7.50 to finish 15th.