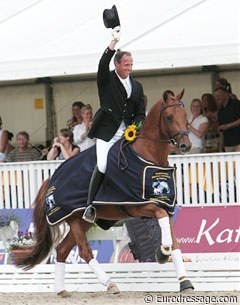 The KWPN bred stallion Karolus van Wittenstein won the 6-year old consolation finals today. Under Patrick van der Meer, the chestnut stallion by Krack C out of Roos (by Partout, a full sister to Dutch team horse Nadine) scored 7.90. The horse has much elasticity and bounce in his movements, but he was not at all through the neck and quite unsteady in the contact with the bit.

The judges praised his "good activity, rhythm and suppleness" in canter and remarked that there was a "lack of fluency in the bends." The horse is bred and owned by Jacatra Inc. 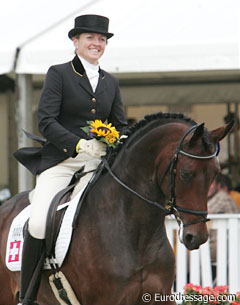 The top three ranked horses qualified for the 6-year old finals on Sunday. The second place went to the Swiss bred mare U.S. Latina (by Rubin Royal x Landjonker) present by Nicola Heyser. In trot, the dark bay mare has incredible spring and so much cadence, but she needs to be rounder and more over the back in canter as she tightens her entire topline in this gait. She scored 7.88

Lena Teichert's Hanoverian gelding Wells Fargo (by Welser x Fabriano) finished third under German Insa Hansen. The combination could have scored higher than 7.80 but the rein back was blocked and he jogged a few steps in the medium walk which reduced his score on submission to 7.6. Wells Fargo's highest scoring gait was the trot, for which he earned 8.0.