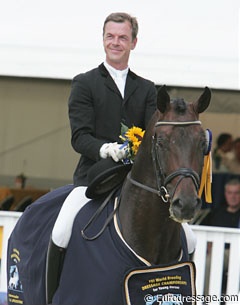 Ulf Möller and his wife Eva captured place one and two in the 5-year old qualification round for the finals at the 2009 World Championships for Young Dressage Horses in Verden, Germany, on August 6, 2009. It was a hot 30° C sunny day in Verden but heat didn't affect the performance of Ulf Möller on Paul Schockemohle's Oldenburg branded stallion Fürst Romancier (by Fürst Heinrich x Romancier). The pair scored a total of 8.76 which was the highest overall mark of the day.

The dark bay stallion scored an 8.80 for trot and walk. The trot work was well regulated, balanced and rhythmical. Fürst Romancier has lovely knee action and tracks up well behind. In the trot extensions he covered much ground, but leaned on the rider's hands. The walk was super in clarity of rhythm and overtrack and the canter (8.5) was uphill. None of the three halts in the test were square, but the rein back was very good. Möller got 8.5 for submission and the judges' overall impression was 9.0, which all totalled to 8.76 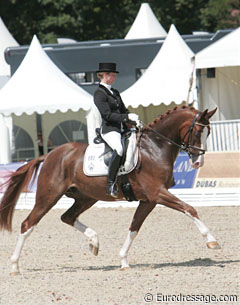 Ulf's wife Eva finished second aboard Italian Silvia Rizzo's Westfalian gelding Blickpunkt (by Belissimo M x Weltmeyer). The chestnut, coloured by eye-catching stockings and a blaze, makes a big impression in the ring with his looks and gaits. Especially his trot is his signature gait. The horse has a Ferrari engine behind and has the biggest push and overtrack in the extended trot. To highlight this spectacular trot (score 8.9) Möller rode the gelding very forward, even a bit too much as he stumbled and broke into canter at the end of the first diagonal. The extended walk was beautiful with three hooves overstep (8.8). In canter (7.7) the gelding was well controlled, but the left canter was a bit flat and could have been more over the back and round in its jump. The right one was much better. 8.5 for submissiveness and general impression added up to an 8.48 total mark. 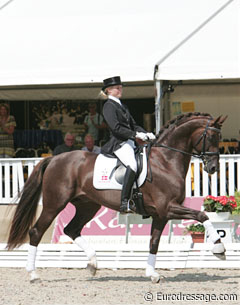 The first horse to go today, the Danish warmblood Skovens Rafael (by Blue Hors Romanov x Blue Hors Don Schufro) thrilled the judges and crowds immediately with his high quality movements. Owned by Per Skaerbaek and Lotte Lindgren, Skovens Rafael was presented by Per's wife Lotte Skaerbaek. The long-legged liver chestnut stallion is very lightfooted in trot, even though he paddles quite a lot. He stayed uphill and light in the hand at all times and showed good push from behind in the extensions (8.0). In walk there were three hooves overtrack, though there could have been more stretch in the front leg from the shoulder (7.8).

The canter is his trademark movement with its huge scope and ground cover. The hind leg pounds on the ground like a piston and the difference between the working canter and the extended was virtually invisible (9.0). He scored 8.9 for submission and 8.5 for general impression which resulted in 8.44. 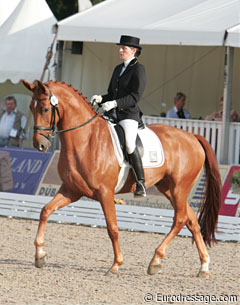 German Esther Maruhn and the Hanoverian branded Watulele (by Wolkenstein II x Frappant) slotted in fourth . The chestnut gelding looks quite old fashioned in model, but he has three very functional basic gaits which could be very suitable for the upper level movements.

The chunky gelding had a very active hind leg which could have stepped a bit more under (8.2). The walk was good in rhythm and relaxation (8.0) and the canter was big (8.2) while the horse showed great obedience to and willingness to work with his rider (8.8). They ranked fourth with 8.32. 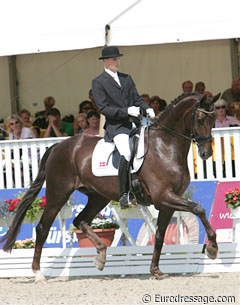 Helgstrand excelled the most with Driver, a horse he owns himself together with the breeder Hans M. Jorgensen, who is also the chairman of the conglomerate Danish Horse Breeding Society. Driver has incredibly lofty trot with a super hind leg. He could have more stretch in the front leg, but the knee action is definitely there. He scored the highest mark for trot of all horses (9.0). Driver lacked some bend in the corners and the halt at entry was crooked.

The extended walk showed much forwardness and good relaxation (8.2) and in canter the horse covers much ground (8.1). He did spook and made a flying change in the extended canter which pushed the score down for submission (7.4), but the judges' overall impression was 8.7 which led to 8.28. 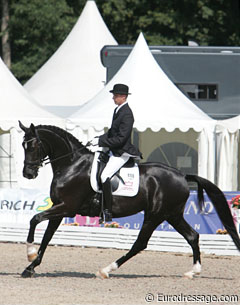 The black gold medal winning mare UNO Donna Unique ranked just behind Driver. The mare has a balanced trot with an active hind leg but lacks bending in trot in the corners and voltes. In the first extension a few steps were short-long but the second was great (8.7). The mare was resistant in the rein back and stepped outside the arena with her hind legs (which pushed the submission score down to 6.9), but the walk had great overstep (8.8). In canter the mare was quite crooked in the body, not only in the strike offs but also in the canter on the long side. The counter canter was very balanced and regulated (8.5). They scored 8.24.

Ingrid Klimke and the Westfalian licensed stallion Dresden Man (by Dresemann x Florestan) finished seventh with 8.22. The black stallion is owned by the British couple Jason and Clodagh Wallace from London, who work in the international music industry. The working trot was lovely. The horse has much suspension and is active from behind but he tended to rush himself in the extensions (7.9). The rein back was a bit tense and in the walk extension he had two hooves overtrack (7.9). The canter was the best gait. Though he sometimes got tense in the back, he stayed well controlled by Klimke and had a super balanced counter canter (8.2). 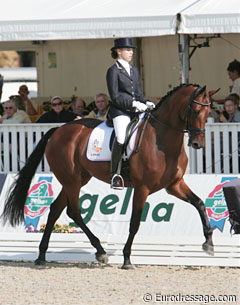 The Dutch delegation disappointed in the 5-year old qualifier with most horses performing below par. The absolute KWPN star of the day was the mare Zolena (by Sir Sinclair x Cabachon) who was actually the reserve combination. Her rider, 17-year old Annerein Kerbert, surprised all Dutch professionals by being the highest ranked Dutch combination as her mare Zolena showed off her international caliber potential. This gorgeous, elegant, long legged mare moved very uphill in the working trot with a light contact with the bit. Zolena could have had more push in the extensions as she got a bit hurried (8.7), but in walk the rhythm was clear though more ground cover is desirable (7.8). In canter she stayed uphill and had good balance in the counter canter. Her total mark was 8.2.