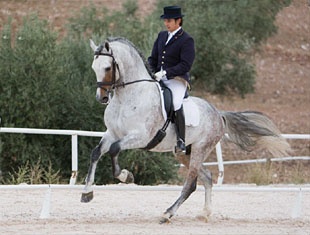 Spain will be represented by only one young horse at the 2009 World Championships for Young Dressage Horses in Verden, Germany, August 6-9, 2009. The Spanish Equestrian Federation has selected Augusti Elias with the Andalusian bred stallion Cazurro.

Cazurro is a grey stallion bred by Yeguada Marin Garcia out of Pampero VII out of the renowned prize winning mare Cazurra. The dam by Albero II is a gold medal winning mare at the 1995 SICAB and was Spanish Champion for Movement.