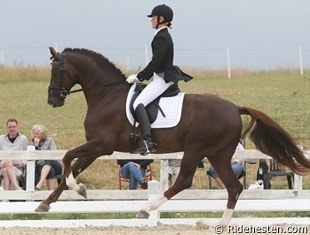 The Danish Warmblood society and Danish Equestrian Federation have announced the team of horses that will represent Denmark at the 2009 World Championships for Young Dressage Horses in Verden, Germany, August 6 - 9, 2009. The selection of the Danish 5 and 6-year old is based on four selection trials all over the country and a big finals held in Middelfart, Denmark, on July 3-5, 2009.

The Denmark is sending an extremely strong group of young horses this year. Much is expected of Donna Unique and Honnerups Driver, but even more from Skovens Rafael. Skovens Rafael (by Blue Hors Romanov x Blue Hors Don Schufro) achieved nothing less than 97% at the first selection trial. He has won everything since he was under the saddle for the first time. Rafael was purchased at the elite foal auction for 10,000 euro by an Irish investor who then had him raised at Blue Hors for the next 2½ years. At the stallion licensing he became the price highlight and sold for 160,000 euro to Lotte & Per Skjærbæk and Lotte Lindgren as a Grand Prix dressage prospect for Lotte Skjærbæk. He became licensing champion and has won the young horse championship and so much more.

The qualified horses are: