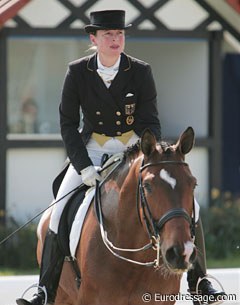 Yesterday I was informed by the German Equestrian Federation (FN) that during a medication test on 30 May 2009 at the CDI in Wiesbaden, traces of the substance Fluphenazine were found in a sample taken from my small tour horse Whisper.

Therefore I feel the need to inform the public personally about the background of this matter, in addition to today's FN press release.

Whisper suffers from the so-called "Shivering Syndrome". This affects the central nervous system and causes imbalances if the horse has to stand on three legs for a longer time, for example when being groomed, bandaged or shod. Because he feels insecure, the horse begins to shiver and makes uncontrollable jumps out of fear of losing its balance. This illness is not painful and does not influence the horse's ability to compete, but it entails an increased risk for the persons working with the horse (farrier, groom, rider).

Therefore I asked my veterinarian Dr. Hans Stihl (SUI) if and how this Shivering Syndrome can be treated. Dr. Stihl explained to me that so far there is no cure for this illness, but that several horses in his care had showed positive reactions to a drug called Modecate. This drug contains Fluphenazine as an active substance. So we treated Whisper once with this drug on May 16, 2009 in order to find out if he responds to it. This was the case, the shivering was reduced, and there was less uncontrolled movement when we raised one of his legs.

When asked for the settling time, Dr. Stihl told me that according to his experience six days are enough, but one could never be completely sure. So to be on the safe side we decided to let Whisper compete again on 30 May 2009 in Wiesbaden. I took this decision to the best of my knowledge. In spite of this, the FEI doping lab has now found traces of the forementioned substance. One reason may be that the lab has used new analyzing methods.

The FEI has suspended me immediately as dictated by the rules of procedure. The fact that only ineffective traces of the drug were found does not matter according to those rules. I deeply regret this incident, but I was convinced that I had acted correctly.

I wish the rules would be revised as quickly as possible in a way that allows reasonable treatment of sport horses without risking long suspensions. The settling time changes constantly with each new method of analysis and it becomes literally “incalculable”.

I am aware that I have given reason to doubt the honesty and fairness of my person and of our sport. I herewith apologize to everyone who is close to me and to the equestrian sport. Of course I will do everything to help clarifying any questions that still remain.