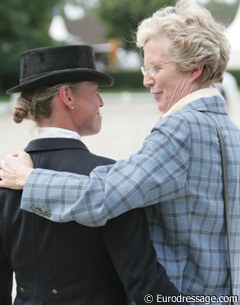 Madeleine Winter-Schulze, Isabell Werth's sponsor and owner of her competition horses, has reacted to the news of the positive doping test of Werth's Whisper and to the suspension as Werth as rider.

In an interview with the German Sport Information Service (SID), Winter-Schulze has commented the Whisper underwent a treatment a few days before Wiesbaden, but it was the veterinarian who said it was safe to compete.

"It is awful," Winter-Schulze told SID. "Everybody is so disappointed" in the stable of Isabell Werth. "I'm not angry at her. She can't do anything about it.

Sönke Lauterbach, secretary-general of the German Equestrian Federation, showed a very unsolidary disposition towards Werth in a day time television show on the ARD broad cast station. He stated that where success, money and power is involved, one can find manipulation (the full interview can be seen here).

St. Georg interviewed several veterinarians about the banned substance Fluphenazine, which can mainly be found in the human medicine Dapotum. It is not allowed for horses but it has been widely used on spooky horses for many years now.

"When a horse is a bit cuckoo, Fluphenazine is the means to an end, but people know for more than ten years now that the substance is traceable," said a vet to St. Georg, who wanted to remain anonymous.

It is surprising that Professor Wilhelm Schänzer of the Technical Sport School of Cologne stated to the German press agency DPA that the substance is allowed as sedative for transport or medical examinations.

Dr. Henry Ottilie of the University of Leipzig explained that "Fluphenazine is part of the neuroleptics group. It is only allowed in Germany in veterinary medicine in the substances of Sedalin and Vetranquil (with Acepromzine) and Stresnil (Azaperone).

Apparently, the professor from Cologne seems to be wrong as the substance is listed on the positive doping list and is normally not applied on animals, but the drug can be used illegitimately.

It must be noted that the Technical Sport School of Cologne has been working together with Ludger Beerbaum for years. Beerbaum has been suspended by the FEI because of doping suspension.