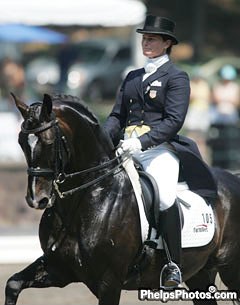 The first leg of the 2009 U.S. Grand Prix Dressage Championship, which was rescheduled to Friday morning after Thursday’s deluge, showcased some of the top horse/rider combinations in the US. But it wasn’t until the final ride of the class that anyone could break 70%. Veteran rider Leslie Morse and her classy 15-year-old stallion, Tip Top, put in a very focused and expressive effort to take a commanding lead with a score of 72% at the 2009 Festival of Champions, sponsored by Collecting Gaits Farm.

“I wasn’t sure what the scores were before I went in,” said Morse, who traveled from Beverly Hills, CA. “We have two more days, so I saved something up – I wanted to put in a solid, solid ride. The weather changed, it is very humid today. It was cold when we got here - so I just wanted to have a nice good ride and build from there.”

The weather was far more cooperative than Thursday for the second day of competition. The rain hung in the air on a damp day but spared both competitors and spectators from falling from the sky. A showcase of the best dressage horses and riders in the country always proves popular at the USET Foundation Headquarters in Gladstone, NJ and names, both familiar and new, graced the top of the leader boards.

Pierre St. Jacques was first in the ring on Lucky Tiger and his score of 68.596% held until Morse’s ride. They have had a promising build-up to the Championships – and Lucky Tiger seemed to thrive in the intimate atmosphere.

“It didn’t matter if I was first or last,” said St. Jacques, who lives in Anthony, FL. “I prepared like always – it was a lean test and he let me ride him. We had a little mistake in the last piaffe, he was trying really hard. There is more in him, he keeps getting better and better and he’s happy doing what he is doing.”

Local New Jersey rider Michael Barisone rounded out the top three on a relatively new ride, Olympus. Barisone was the reserve rider for the US Team at the 2008 Olympic Games in Hong Kong with Neruda, but made a point to bring Olympus here to introduce him to the big league.

“I actually thought he has great today,” said Barisone. “It’s our third show together so I’m never sure what I will have. He is a very different horse to ride than Neruda, this horse is so solid. I’m getting to know him and I have not asked him nearly what he is capable of. He’s not dynamic like Neruda, but sometimes you don’t need that.”

The Grand Prix Freestyle will be the highlight of tomorrow’s program, taking place at 4.30 pm.

“Tip Top has a new freestyle that we are trying out,” said Morse. “It’s very, very exciting and fun – surprisingly fun. It will be interesting to see what everyone thinks.”

The Grand Prix Special will complete the National Championship on Sunday morning, because of the weather the Freestyle and Special are being held in the opposite order of what is done traditionally at this Championship. The Grand Prix counts for 45%, the Special for 35% and the Freestyle for 25% (editor's note: this strangely cummulates to 105%. How can this be?????). The best cumulative percentage will crown the 2009 USEF National Grand Prix Dressage Champion. 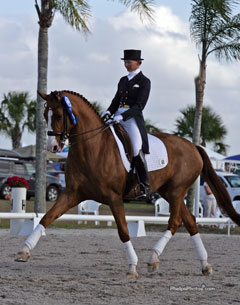 The quality of work was very high in the Prix St. Georges test, the finale of the competition-packed day with six horses scoring over the 70% mark.

Katherine Bateson-Chandler and Dea II was the best of the group. Their performance was dynamic and polished; a little mistake in the walk wasn’t enough to take away from the overall quality of the test. The effort was rewarded with a score of 73.105%.

“She showed me today that she is a true international horse,” said Bateson-Chandler about the flashy chestnut mare. “She has grown up a lot and overall was more secure in the ring.”

The Wellington, FL rider also placed third on Rutherford with a score of 71.00%. The leggy bay gelding was very animated and did great trot work. A little green in his changes, Rutherford made up for it with a very happy demeanor and overall quality.

Both horses are 11-year-old Dutch Warmbloods owned by Jane Forbes Clark, a long time devoted supporter of the US Equestrian Teams and horses.

“The horses are totally opposite,” said Bateson-Chandler. “They are both big movers, but he (Rutherford) is Type A – more insecure and relies on me, and she (Dea II) just wants to go in there and show them how it is done.”

Splitting Bateson-Chandler’s pair was Jan Brons and Teutobod. Brons, a US citizen since 2001, has been on a massive wining streak in 2009. His score of 72.211% was good enough for second place.

The effects of two inches of rain the day before weren’t evident by the time the sun came out in the afternoon.

“You never would have known it rained like it did,” said Brons.

Bateson-Chandler and Brons are good friends and the success of Dea and Teutobod demonstrate how horses, like human athletes come in a variety of shapes, sizes and demeanors.

“They are two totally different animals,” said Brons. “Her test was beautiful – Katherine is a good friend and she totally deserved to win. I will just have to try to beat her tomorrow.”

The Intermediaire I Championship continues with the second of three legs tomorrow morning at 9 a.m. and concludes with the Freestyle on Sunday. 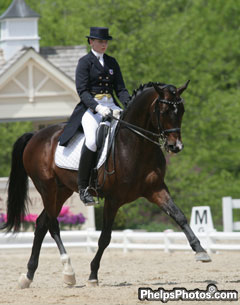 After the Young Rider Team Test, a very familiar name took the honors in the first class of the National Young Rider Championship: Kassandra Barteau, the 2007 and 2008 defending champ, got her title defense underway on GP Raymeister.

“I made a few little mistakes,” said Barteau who is 21 this year. “I could have had some more push; I can push for more on Sunday. I will take it one day at a time, I can show him off a bit more – he’s super fancy.”

After winning two years in row with Robert Oury’s mare Gabriella, Barteau has a totally different challenge in GP Raymeister (who is owned by Ginna Frantz).

“He’s the total opposite of Gabby,” said Barteau. “But it is a good learning for me, he’s a fabulous horse. He’s a way hotter horse, but I ride a lot of different horses. I love his energy and I’m excited to learn how to ride him.”

With a score of 69.946% the Maple Park, IL rider put in a typically polished performance in the 9-year-old stallion’s first year of FEI competition.

It wasn’t a runaway victory however, and Meagan Davis and Bentley are hot on her heels with a score of 69.211%. Owned by Kelly Roetto and John Rocco, the 16-year-old Danish Warmblood had very good trot work and their test flowed well.

“He’s a phenomenal horse,” said Davis. “I could not ask for a better teacher. I’m so proud and it means a lot. It is an incredible feeling to have so much support behind me.”

Christine Stephenson and Markant made the trip from California worth the miles, picking up third place honors after the first half of the National Championship.

The 15-year-old Dutch Warmblood has improved dramatically thanks in part to training with Olympic superstar Steffen Peters.

“I was really happy,” said Stephenson. “I started riding with Steffen and it has been fantastic. My trot work is inconsistent, he can be a little naughty on the right rein but once we get that, he will be really good.”

All three of these Young riders have their eye on the 2009 Adequan FEI North American Junior/Young Rider Championships presented by Gotham North (NAJYRC), which will take place July 22-26, 2009 at the Kentucky Horse Park.

Lauren Knopp and Rho Dance were rock solid in the Junior National Championships and took a convincing lead on a score of 68.378%. Their test was professional and the 18-year-old rider looked very comfortable on such a big stage performing the Junior Team Test.

“I was really surprised,” said the 18-year-old Wellington, FL rider, who recently graduated from high school. “I didn’t think I did as well as I did and when I saw my score I burst into tears. It is my first national championship and it’s amazing here. It’s a really nice experience to come here and show here.”

Riana Porter and Romax Foldager put the miles on the odometer to get to New Jersey, but with a second place finish in the first half of the Junior Championship on a score of 66.486%, the trip from California is proving to be worth the effort.

Porter forgot her test, which she blames on focus, not lack thereof.

“I was focusing so much on getting my shoulder-in perfect that I forgot the circle,” said 17-year-old Porter.

The mistake happened early in the test and she bounced right back and put in a rock-solid performance after that.

The next six riders scores are separated by less than 2/10ths of a percent but the highest of them proved to be Stephanie Nowak and Coriall. She also made an error in her test – she said nerves snuck up on her.

“It must be nerves,” said Nowak, also 17. “Because the only other time it happened was at North Americans (NAJYRC) last year on the first day. I have done these tests so many times. I never get nervous so it is foreign to me. But the horse was with me through the rest of the test.”

Their score of 64.865% meant they claimed third place honors. A veteran of the NAJYRC program and a participant in the USEF Dressage Seat Medal Finals presented by Dressage Today®, Nowak has been involved on every level of the US Dressage program.

The Juniors ride their Individual Test (the second and final portion of their championship beginning tomorrow at 11.20 am.