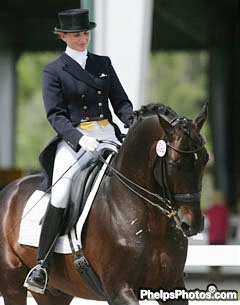 The teams for the nations competition at the 2009 CDIO Rotterdam have been announced. Though Rotterdam counts as a selection trial for the European Championships for many countries, not all nations are sending their strongest, most confirmed teams

but prefer to are experiment with upcoming riders.

Denmark, for instance, is experimenting with two new riders, the American based Mikala Gundersen who trains with Lisa Wilcox in the U.S.A but is now in Europe to train with Ernst Hoyos and rising talent Sune Hansen on Gredstedgårds Casmir.

The Dutch equestrian federation and team trainer Sjef Janssen have announced the team that will represent The Netherlands at the 2009 CDIO Rotterdam, where a nations' cup will be ridden. Based on the performances of the riders the past season and at the 2009 Dutch Dressage Championships last weekend, Janssen selected the following team:

For the British dressage riders, Rotterdam is an important event as the team selectors will keep their eyes open for the best performing rider who can become the third rider on the British team at the Europeans. Laura Bechtolsheimer and Emma Hindle are already certain of a place, but the battle for the third team spot seems to be between Bigwood, Gregory and Hester.

Germany is not sending any A team riders but has gathered a team of professional dressage riders to represent the country in The Netherlands:

The Belgians are also teaming up some upcoming Grand Prix riders who can gain experience at the big Rotterdam dressage event.

Sweden is represented by: