Medals, Doping, Equestrian Sport - What will the Future be Like? 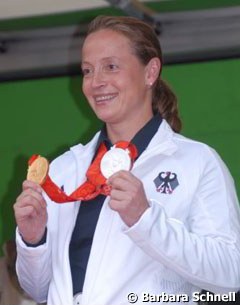 Has the equestrian sport lost its positive image following severe doping issues at the 2008 Olympic Games? German equestrian professionals will be discussing the future of the equestrian sport -- pressured between success and doping -- tonight. CP Medien will be streaming this discussion live, for free, on the internet at 19.00h

Each horse fan was ecstatic about the German achievements at the 2008 Olympic Games: Gold for the German eventing team, gold for German eventer Hinrich Romeike and Marius. Gold for the German Dressega team. But there was also a wake up call, a disappointment. The German show jumping team failed to produce good results, but even worse was the doping scandal involving five horses, amongst which Cöster of German Christian Ahlmann.

Nine months later, the international Sport Arbitrary Court CAS has ruled that Cöster indeed tested positive to doping and Ahlmann has been banned from competitions for eight months. Quickly after this court order, another doping drama was disclosed: Cornet Obolensky fainted following an injection administered by his rider Marco Kutscher.

Kutscher explained, "whether the injection was registered or not, I don't know." It is striking that there is so much unprofessionalism and lack of knowledge of the rules. What can one believe? What will the future of the sport be like?

Reinhard Wendt, chief of the German Olympic Equestrian Committee (DOKR) believes one can no longer talk about exceptions of "manipulation" in the top sport. This current doping affairs are a coupe de grace to the international show jumping sport.

What is the future of the German equestrian sport. Six German professionals will have an open debate about it at the Rhinelander performance cntre in Langefeld, Germany, on 13 May 2009. The panel consists of Heinrich-Hermann Engemann (show jumping trainer ), Frank Kemperman (Manager des CHIO Aachen), Ingrid Klimke (eventing team rider), Isabell Werth (Olympic champion dressage) and Dr. Hanfried Haring (former director of the German Equestrian Federation ). Reinhard Wendt will be the moderator at this debate.

The discussion can be followed live at www.cpm24.tv as of 19h00