Heike Kemmer and Bonaparte Return to the Winner's Circle 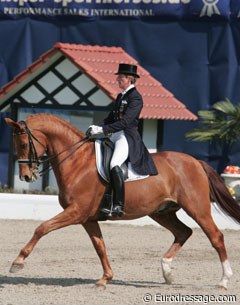 There were two highly anticipated classes at the CDI Hagen: the Grand Prix for Special and the Grand Prix for Kur. The Horses and Dreams show is the first outdoor competition of the season and it can be quite challenging for sensitive horses to brave the weather.

Furthermore, the Kur might be a fun class to watch but the Grand Prix remains to be the essence of dressage riding: a perfect display and measurement of the technical level of the trained dressage horse.

Everytime you see Olympians Heike Kemmer and Bonaparte on the starter's list, it is a good opportunity to go and watch. The pair rarely turns out and usually only competes at the German team selection trials and that's it.

But Kemmer and her 16-year old Hanoverian Bonaparte (by Bon Bonaparte x Consul) still got what it takes to win and led in the Grand Prix and Kur to Music. In the Grand Prix the pair started out with powerful trot extensions, but Bonaparte got tight in the neck in the half passes. The piaffe is good in rhythm but could have some more spring. The extended canter was full gas and the zig zag was the highlight of the test. In the final passage on the centerline some evenness lacked, but the ride was good to score  72.426% 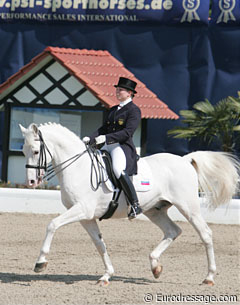 Balagur's passage could have been more closed in the frame, but his textbook piaffe remains unchallenged. There was a small hiccup in the transition passage - canter. There was some loss in the clarity of the rhythm in the zig zag but Korelova knows how to ride on the dot. Her pirouettes were lovely and tiny.

Helen Langehanenberg and the 10-year old Oldenburg mare Responsible (by Rohdiamant x Frappant) finished third with 68.681%. Previously trained by Ingrid Klimke and now being coached by Klaus Balkenhol, Langehanenberg has made it to the German A-team and is working for a spot on the team.

Her black mare has ground covering trot extensions but rushes through them. The rein back was difficult and the one tempi's should have been more uphill, but the piaffe and passage work is good quality and especially the passage has outstanding rhythm. 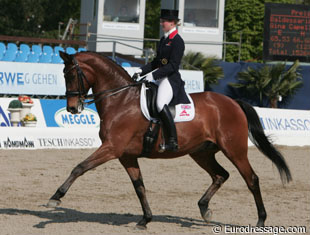 British Laura Bechtolsheimer competed her number two Grand Prix horse Andretti H in the Kur tour. The 14-year old Hanoverian gelding Aarking xx x Cavalier is extremely gifted in piaffe and passage but the connection with the bit was quite unsteady. The left pirouette left lacked jump, the transition from passage to canter was 5 meters to early and the collected trot tended to be too much passage-like. These minor mistakes and imperfections pushed the score down to 68.553%

Imke Schellekens-Bartels was the only Dutch A-listed who ventured into the lair of the beast to compete against Germany's A-team riders. For the Kur tour she saddled her new ride, Ferero, an 11-year old Ferro x Wellington offspring owned by her student Chantal Wigan. The dark bay was still very unsteady in the contact with the bit but showed a highly cadenced and active trot. His passage is fantasitc but the piaffe lacks some impulsion. The canter zig zag was correct but slightly rushed. It could have been more balanced. Ferero lacks some grace and lightfootedness but his passage is definitely the highlight move on this horse. They scored 68% 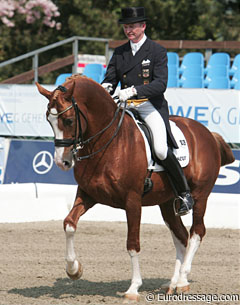 Hubertus Schmidt and Anna Paprocka Campanella's Dutch warmblood stallion Prego (by Zazou x Ult) slotted in sixth. In the warm up ring, Prego rests his tongue outside his mouth but in the test he made the wise decision to keep it locked in. Schmidt scored 67.702% but the score would have been higher had he not forgot to do the rein back.

The funny looking chestnut with four stockings and a blaze has a lovely even passage and good rhythm in piaffe. He came a bit behind the bit and tight in the neck in the zig zag and the one tempi's should have covered more ground.

Matthias Alexander Rath presented his stepmom Ann Kathrin Linsenhoff's 9-year old Dutch warmblood gelding Triviant (by Olivi x Saluut). The stunning bay gelding looked very green but the potential is there. The passage is high off the ground, but unlevel, the piaffe was very difficult to find the rhythm. The extended trot was super, the extended walk lacked overtrack and the collected walk had a loss of clarity in the rhythm. The second piaffe was super but there was resistance in the transition to passage with the horse leaping forwards. The entire test looked messy and undefined though the horse had great moments. The score of 67.702% was extremely generous and judge Truppa seemed to have been more on the right end with his 64,255%.