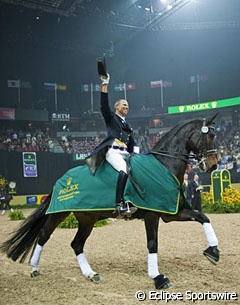 There can't be anything better for the sport than a rider who is able to beat the perpetual rulers of the dressage world. German born American Steffen Peters has come to power by winning the 2009 World Cup Finals and abdicating Isabell Werth and Anky van Grunsven.

Though the crowds were deliriously enthusiastic and the roof came off the Thomas and Mack centre with a pandemonium of applause, two points must be taken into account to bring everyone back with both feet on the ground: Peters did this on home soil and Van Grunsven wasn't riding Salinero. Would the results have been different if Anky had taken Salinero or if the World Cup Finals were in The Netherlands?

But let's not be too realistic at the start of this article, because it will spoil the fun, especially now that anyone not riding on the Dutch or German flag has been able to win an international championship for the first time! And Peters tumbled the titans with power. 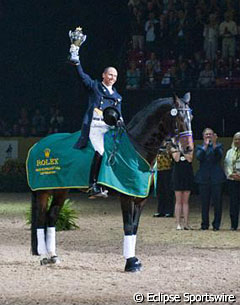 Riding to the Rolling Stones' Sympathy for the Devil and Coldplay's Vida La Vida (music he added to his freestyle after Hong Kong), Peters had his Dutch warmblood gelding going with panache and energy. The pair had an unscripted slip into canter right at the opening of their ride. It was the first of a few minor bobbles in an otherwise mistake-free test. The passage was nicely off the ground, the piaffe was rhythmical.

The difficult transition from passage to canter was a bit croup high and there was a slight hiccup in the two tempi's on the curved line. In the one tempi's the rider's aids were very visible with Peters' legs going backwards and forwards, but the double pirouettes were well executed and the canter half passes were very ground covering. The trot and canter extensions were simply wowing.

Ravel's tank was filled to the brim with gas and he maintained a high energy level throughout. The extended walk was relaxed and had much overtrack but Ravel could have stretched his neck a bit more. Some huge trot half passes followed. They were going smoothly with brio, though the gelding could have kept his tail more quiet. 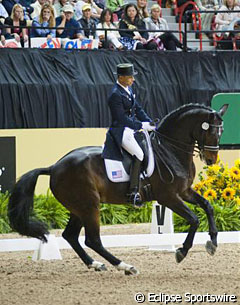 The level of technical difficulty was high and everyone very much liked the transition from trot half pass into passage half pass. Especially the right one was awesome and earned him a 10. Ravel is quite a powerhouse and at the end of the test still kept a good rhythm in the piaffe without becoming stressed or tense. The electric crowd burst into a huge roar at the end of Peters ride.

It was immediately obvious that Peters' score would challenge Werth's. Isabell had taken a provisional lead with 84.500% but Peters narrowed her out with a fraction of points at 84.950% to capture the 2009 World Cup Title, the first male rider to do so! Peters is also the second American to win the World Cup. Debbie McDonald and Brentina won in 2003 title after Ulla Salzgeber got disqualified for a drug infraction. 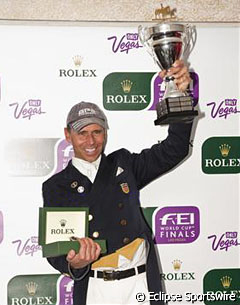 "It's so amazing, I am speechless," Peters commented after his ride. "It's unbelievable to share this with the audience. I truly believe its magic soil, to do this here in front of the audience. My mom watched it on the internet but she didn't see the score. I wish she could have been here too, but when she heard the score on the phone to Shannon [his wife], she screamed," Peters rejoiced right after his test.

At the press conference, Peters was overwhelmed with emotions. “To share that moment in time with the most amazing dressage fans in the world is an incredible feeling. It hasn’t quite sunk in yet. In a few hours, when I see family and friends, it will. It’s just an incredible feeling,” said Peters.

The difference between Peters and Werth was small and if Werth had not made a tiny mistake in the two tempi's, she would have secured her third World Cup Title. Werth's face looked stern and focused when she entered the ring. Knowing her and pegged as favourites for the victory, she would not make a second mistake by lapsing in concentration like she did in the Grand Prix. 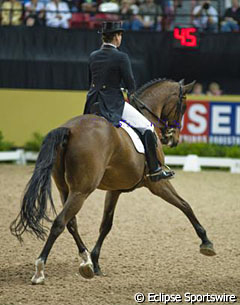 Satchmo looked fresh and willing and was attentive to his rider's aids. Her "Hymn of Devotion" kur started with a good piaffe on the centerline right in front of the judges, followed by a stunning extended trot and brilliant trot half passes.

The second piaffe looked confident and was good. In passage, Satchmo has nice buoyancy but his hind legs tend to trail a bit.

No rider matches Werth's level of technical difficulty . A single pirouette was followed by two tempi's on a half-circle with a direct transition into one tempi changes. A small mistake in the two tempi's was probably the fatal stroke. Werth closed her test with passage half passes ridden with the reins in one hand! Though her music is not exactly composed to the footfalls of her horse, it is certainly dramatic and its filmic qualities reminisce of a grand Spielberg epic. 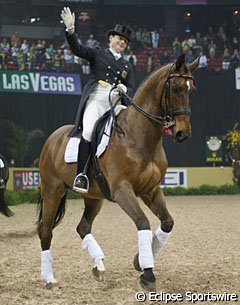 Werth finished her test with a smile on her face. She racked up 84.500%

The German was very satisfied with her ride. "I’m really, really happy with Satchmo. He was super. I had no problem inside. I think he’s really settled down in the arena. We were both really concentrated so it worked."

Peters' score of 84.95% won the day, but it was fuel on the fire of yet another judging dispute. Two judges put Peters first, three ranked him second. American judge Linda Zang and Dutch judge Wim Ernes both had a huge score difference with their three colleagues. The pair gave Peters five percent more on a technical level than, for instance, their colleagues Maribel Alonso and Katherina Wust. The judges, however, were much more unanimous in assessing Werth, having with less point fluctuation between each other. 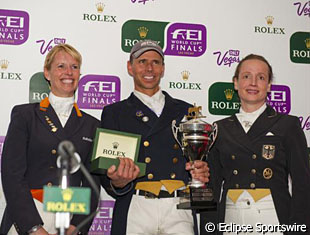 Though happy about her ride, reserve champion Werth was spitting bullets at the press conference, pointing at Zang and Ernes who, according to her, had distinctively overscored Peters in comparison to their three other panelists. She especially referred to Dutch judge Ernes, who also scored Werth's test the lowest.

"For me it was a really tough and close competition,” said Werth. “At the end I was second, but next time I’ll try to make it a bit harder for him. Maybe I’ll have one more judge, and it will be four, not three that have me in number 1." 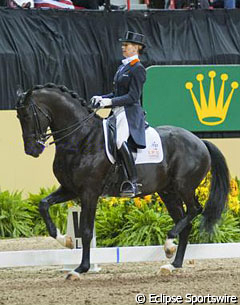 Werth's unsportsmanlike behaviour at the press conference contrasted heavily with Anky recognizing her superiors. Of course to Dutch champion, it hardly could have gone better. She finished third in the World Cup Finals while initially she didn't want to bring Painted Black at all.

The stallion's unreliable attitude in the show ring proved to be the major concern. Remember Sjef Janssen's words in Den Bosch: "With Painted she can win a medal, or finish eighth. And for that she won't travel half the globe. If she goes, she goes to win."

The cheerful Dutch rider finished third with the best freestyle she has ridden so far with Painted Black. The moody stallion sometimes looks sour when he gets collected by his rider, but this time he looked amazing!! 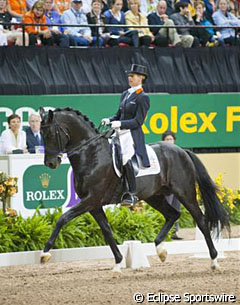 Painted Black was co-operative and brimmed with energy and athleticism. The ponyesque horse with an unclear canter we saw at the 2002 World Young Horse Championships is slowly turning into a major bundle of power with incredible elasticity and push.

Anky rode her highly praised Tango freestyle, composed in 1999 for Partout and afterwards revamped for Idool. The music does not match Painted's hoof beat and lacks in synchronicity between music and gaits, but the atmosphere and tunes are truly music to one's ears. The black KWPN stallion showed huge trot half passes and breath taking trot extensions. The passage was nicely off the ground, the rhythm in piaffe super and the pi-pa transition fluent. The first mistake came in the two tempi's which Anky tried to fix by riding another set, but another mistake occurred. The test ended with a fantastic passage and extended trot though the black stallion stumbled once. 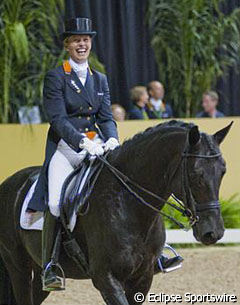 Anky put down a masterful ride and had Painted at all times nicely in the frame, though he could have chewed on the bit more. The major thing that fails to impress in her freestyle is the lack of technical difficulty. Tempi changes are on straight lines, piaffe is on the track. These things should all be fixed for a horse performing at such a high level.

But Anky was very pleased with her third place. "I am really happy," she said. "For Painted Black it is his first time in a big competition like this. He can be sometimes better than other times. This time he was very good and very concentrated. I had a mistake in my two-tempi's, but even with that mistake I'm very happy."

She acknowledged that a third rider at the top is good for the sport. “I think it’s good that Steffen won. He had the highest score, and he was the best today,” van Grunsven said. "Of course we’re going to go home and practice very hard to beat him next time. That’s how competition should be. It shouldn’t be that people think Isabell or Anky is going to win. It should be between all of us." 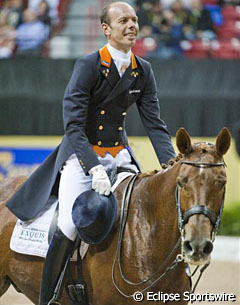 Dutch Hans Peter Minderhoud must have felt like a winner with his fourth place and personal record score in the freestyle of 81.050%.

Minderhoud rode Ton Kies' 14-year old Dutch warmblood mare Nadine better than ever before. The liver chestnut lady seems to improve with each show and she was on a high in Las Vegas. Her expressiveness in trot was amazing. Her passage was so bouncy and beautiful and the piaffe was few in steps but well executed. At all times she was nicely in the frame with a good head position, though in walk her neck could have stretched more.

Minderhoud rides one of the most appealing freestyles with music well synchronized to the horse's gaits. At the end of the test it appeared as if he was a bit off the music and overpushed her in the final passage asking too much. 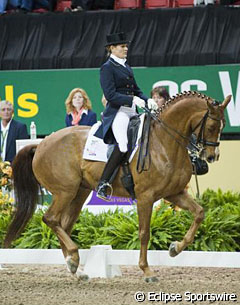 "The reactions of the audience were amazing," Hans Peter said. "We got a big applause for our first extended trot. I was a bit scared that Nadine would get too hot, but she didn't. My score was great and I know that if there aren't any mistakes, like the one on the centerline, that I can score even higher."

Canadian Ashley Holzer also had the ride of a lifetime aboard another Dutch warmblood, Pop Art (by Amsterdam). Their freestyle was set to music from Disney Epcot Center fireworks display and from the motion picture National Treasure. The absolute highlight of the test was "Poppy's" piaffe and passage and truly sublime transitions!

“I am very happy to receive two scores of 80% and higher. This is the highest score I have ever received,” said Holzer who is a native of Toronto, Ontario, but who resides in New York, NY. “I am looking forward to giving Pop Art a well deserved rest.”