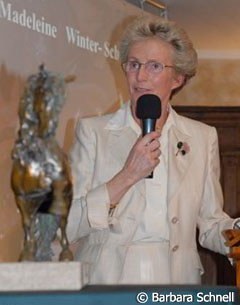 Horse sponsor Madeleine Winter-Schulze has come to the rescue once again. Winter-Schulze, who recently had to cope with the death of her beloved husband Dieter Schulze, has secured Butt's Abraxxas for German eventing rider Ingrid Klimke. Klimke's Abraxxas was half-owned by Thomas Holtrup who wanted to sell his share after the horse's success at the 2008 Olympics (team gold, individual fifth). Rumour has it he offered his part for sale for 600,000 euro. Madeleine Winter-Schulze has purchased this half (though the price is undisclosed) and secured the ride on the horse for Ingrid Klimke. Madeleine also sponsors Isabell Werth and jumper Ludger Beerbaum.

The Swedish Warmblood stallion Chirlon (by Ceylon x Kaliber) has been purchased back by Jan Brink to stand at stud at his farm Tullstorp Stables in Sweden. "I purchased Chirlon back to secure the Ceylon blood for Sweden," Jan Brink told Tidningen Ridsport. "We have so much foreign blood in our horses now that there is a risk of Swedish blood disappearing totally." Chirlon did his stallion performance test in 1993 and scored 9s and 10s for free jumping and 9 for trot. Brink trained Chirlon as a youngster but in 1995 the stallion got sold to Holland.

International dressage judge Dr. Volker Moritz will be celebrating his 70th birthday on 22 March 2009. Moritz is renowned as a dressage rider (Admiral's Cup and Ideaal) and holds a golden rider's medal. In the 1970s he started focusing on judges and quickly made it to O-judge. Between 1978 and 1996, he was chairman of the German Federation for Student Riders (DAR). In 1997 he was awarded the Golden Rider's Cross for extraordinary accomplishments for the dressage sport by the German Equestrian Federation.

The Danish premium stallion Gagarin has been sold to Danish Grand Prix rider Thomas Lindegaard. Bred by Mikala Bagge and owned by York Stutteri, Gagarin is by French Kiss out of a Michelangelo x Worth dam. Because the Elsas family's York stutteri is in financial trouble, it is seriously downsizing its business selling many stallions. Gagarin scored the highest in movement in his 30-day performance test and he finished second in dressage in the 70-day performance test. He was a premium stallion at the Danish Licensing in Herning in 2005.

Vivaldi, the 2009 KWPN Stallion Competition Winner at Z-level, has been sold for half to Team Exquis. The chestnut licensed KWPN stallion by Krack C was initially owned by Joop van Uytert and Ad Valk but Anthony Kies of Exquis purchased 50% of the horse to secure the ride for Hans Peter Minderhoud.

British Grand Prix rider Camilla Sygall has sold her top ride DJ One More Time to the Portuguese Young Rider Maria Paes do Amaral. The NRPS branded DJ (by D-Day x Aktion) is a 12-year old gelding owned by Sygall and her partner Dries Roefs. The English-Dutch couple is based in Riethoven, The Netherlands. Maria Amaral is member of the Portuguese Young Riders' team with Wonderman.

The 19-year old KWPN stallion Inspekteur (by Darwin x Amor) has been sold to Dutch junior rider Kimberly de Jongh and will be back in training with Coby van Baalen. Inspekteur has carried more junior/young riders to ribbons and trophies than any other schoolmaster in Europe in recent years. His last owner Wendy van der Helm had initially sold him to the Czech Republic but a trailer accident cancelled the sale. The stallion has now recovered well enough to take his sixth rider to success. His previous pilots were Marlies van Baalen, Danielle van Aalderen, Vincent van Gasselt, Marrigje van Baalen, and Wendy van der Helm.

This year the 2009 U.S. Dressage Championships will take place again at the USET Foundation headquarters in Gladstone, NJ. The Championships, which are called Festival of Champions in the U.S.A., serve as the USEF National Dressage Championships in five different divisions. They feature the highest levels of dressage, from FEI Juniors (aged 14 to 18) to the Olympic-level of Grand Prix dressage. The top 12 ranked horse/rider combinations in each of the five levels will be invited to compete. Last year, the Festival served as final U.S. Olympic qualifier and was held in California.

A new horse for former American WEG and Olympic team rider Sue Blinks. Doug and Louise Leatherdale acquired the 5-year old Dutch warmblood gelding Zodiac Tymefor Blinks to ride. The bay gelding by Osmium x Zeoliet x Ariban sold in February 2009 and is currently in California with Sue at Leatherdale Farms West. "He's a very powerful mover and has super talent for piaffe and passage," former owner Evi Strasser said. "I knew the horse would be a perfect match for Sue and I'm sure she'll bring him carefully along. He's going to be top with her. I could not have wished for a better home than with the Leatherdales."

The German Dressage Committee has a new chairman. The 45-year old Klaus Roeser is replacing Ferdi-Jörgen Wassermeyer as head of the committee. In addition, four new members have been appointed on the committee. Monica Theodorescu, Heike Kemmer, Hubertus Schmidt and Gina Capellmann-Lütkemeier are the new representatives.

Arlene Page's former Grand Prix horse Claire has become a mom. The 17-year old bay Dutch/Holsteiner mare (by Cassini out of Umaica by Appleking xx) has given birth to a colt by Aldebaran xx. The mare is enjoying her retirement in Germany and her colt has been named Allesclaire.

Katrin Bettenworth's Trakehner stallion Sachsenkönig has been sold to Australia in the summer of 2008. The chestnut Grand Prix gelding by Handryk - Altan II (breeder: the Kunath family, Mischwitz, Germany) is now ridden by Fiona Mc Naught. The combination placed 2nd in the Grand Prix at the Macedon Ranges Dressage Club Competition February 1st 2009.