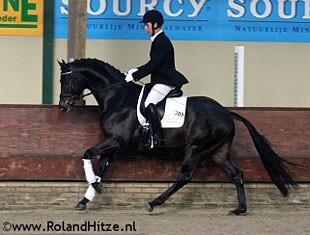 The dressage bred Sunliner became the champion of the 2009 NRPS Stallion Licensing held in Ermelo, The Netherlands on January 31, 2009. Sixteen stallions in total were licensed after the third round of the approval.

The NRPS (Dutch Riding Horse and Pony Society) does not really proclaim a licensing champion but honours the stallion "with the best trot". The title is based on the enthusiasm of the audience and the stallion which receives the most applause wins it. Sunliner, by Sandreo x Goodtimes, was the favourite this year. Previously named Alexander, this stallion beat show jumping bred Cappuchino van de Helle (by Casall x Corrado I). The third stallion really standing out was Travolta's Nieuwmoed, an Olivi x Havidoff x Akzent II colt.

Travolta's Nieuwmoed has quite a history, being an older stallion was approved by the KWPN in 2003 but failed on his stallion performance test because the judges believed he didn't jump well enough for a dressage stallion. Very shortly afterwards, the KWPN society decided that dressage stallion no longer have to jump.