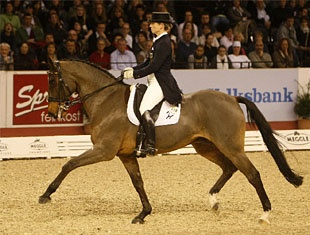 Only one week after the London Olympia Horse Show, the Frankfurt World Cup Qualifier took place in a great atmosphere and with Cristmas carols. Isabell Werth and Satchmo rode their special Freestyle to music called "Hymn of Emotion" with sopran voicing by Sibylla Duffe.

Werth and Satchmo made their Freestyle as sparkling as they could without taking special risks, thus giving the preference to harmony, lightness and easiness.

Their winning test did cast a spell on the audience and the judges. Difficult transitions from extended canter into a pirouette and two tempi changes into one tempi changes impressed judges and audience alike. But almost the most impressive was the modesty and harmony in the performance. Isabell herself looked very much at ease and also more modest and in herself than she normally does. She didn’t take part in evening sessions in Stuttgart out of respect for the memory Dieter Schulze, the late husband of her horse owner and friend Madeleine Winter-Schulze who died last week and to whom she owes so much.

Last year Isabell Werth took the WC win aboard her chestnut Warum nicht FRH in the Grand Prix Freestyle scoring 79,25%, now she was rewarded with 82,0%. There is no doubt that Isabell Werth wants to go for it and give all she has, bringing her to the WC Final at the end of the season in April 2009 in Las Vegas.

Runner up was the German reserve for the Olympic Games in Hong Kong, Monica Theodorescu aboard Ann Kathrin Linsenhoff's 10-year old talented chestnut Whisper. Monica had some special music tunes of Joe Cocker and Lou Reed to show the quality of her Whisper even more. Whisper has a walk for the ultimate  score and so were her tempi-changes. The impression of the pair also was one of greatest harmony and pleasure in performing.

Chairman of the judges Mariette Withages said: “The harmony was the decisive impression of the three first placed riders. They all were an example of the way we judges very much like to see dressage.”

Danish Nathalie zu Sayn Wittgenstein took advantage by showing a very harmonious test aboard her homebred Digby. The Olympian team bronze winning pair chose Leonard Bernstein’s Westside Story to ride on. In America she wants to be and for now she is well on her way with a third place. Especially the last part of her Freestyle was of a great beauty coming out of a turn in piaffe and extending in trot to the final halt.

Unfortunately some harmony was lacking in the performance of the third placed German pair of the Grand Prix, Nadine Capellmann aboard Elvis. Nadine sometimes lacked the control in the freestyle test. Her horse, which originates from a show jumping pedigree but is blessed with very elevated movements, became too hectic after the extended canter and ended seventh.

An American themed Freestyle on Simon and Garfunkel-music was also shown by Swedish Johan Svensson who brought the musical theme with a familiar horse into the arena, 16-year old Hanoverian bred Barclay. Barclay has contributed to many Freestyles and WC editions with his former rider Sven Rothenberger and contributed among more to the Dutch fourth place at the OG Athens 2004 and to the team silver medal at the EC 2005.

Prizewinners Ellen Schulten Baumer, Dieter Laugks and Jeannette Haazen not only received precious World Cup points but also were rewarded by the organisers with an invitation for the Meggle Champions Final in March.

The next qualifier in the league will be the Mechelen Christmas Jumping Horseshow in Belgium in less than a week’s time with the Freestyle taking place 27th December.