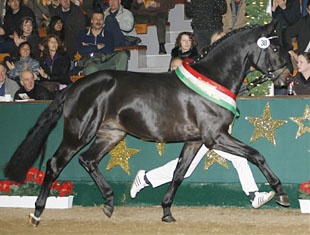 The black stallion had a very good walk, a not so spectacular but ok trot and he made a decent jump in freedom.

At this year's NRW Rhinelander and Westfalian stallion licensing it were the show jumping stallions and especially the Cornet Obolensky offspring, which stood out. However, a dressage stallion became "Siegerhengst." The black Rhinelander branded Fidertanz son sold at auction to Silvia Zimmer of Gut Scheurenhof for 200,000 euro. The Westfalian Landgestut is, however, leasing the stallion from this new owner so the champion will be up for stud in Warendorf, Germany.

The much stronger moving Belissimo M x World Magic x Florestan I became the reserve champion of the licensing. The chestnut stallion is bred by Heinz Trindeitmar and presented at the licensing by Judith Klein. He sold for 150,000 euro to Austria.

The third placed stallion in the premium ring was Son of Cologne, a dark bay Sir Donnerhall x Lanciano x Feuerfunke xx, bred and presented by Breeders Group Kellerwessel from Cologne, Germany. He will be standing at stud at the Landgestut Warendorf. 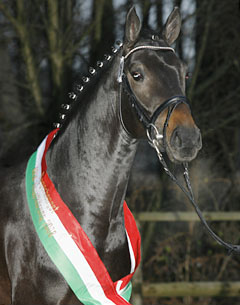 The national State stud in Warendorf acquired many stallions at this year's licensing. Not only did they get the champion in lease, but they also bought the third placed dressage stallion and the best show jumping stallion (by For Plesure x Contender x Mytens xx) which was bred by Alexander Onishchenko and presented by Heinrich Ramsbrock. The Landgestut is also leasing the premium stallions Exzellento (by Ehrentusch x Shardari xx xFifth Marine xx) and the premium colt by Real Diamond x Davignon I x Bolero.

Fifteen stallions qualified for the premium ring and fifty-three stallions were licensed in total. The average price for a licensed stallion at auction was 62,732 €. The most expensive non-licensed stallion was the Lord Loxley x Champus, bred and presented by the Belgian Gestut Sonnenhof. He sold for 27,500 €.