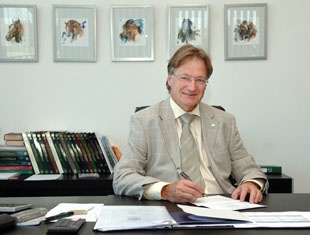 at the 2008 General Assembly in Argentina next week. More news on this ad hoc group has been spilled on a German website which states that Kemperman has been appointed as chair for one year as of the General Assembly.

Currently two "Dressage Committees" are existing next to each other, the Ad Hoc one which has the support of the FEI Executive Board and the "real" FEI Dressage Committee, which FEI president Princess Haya request to resign. The FEI Dressage Committee is elected and approved by the General Assembly and its resignation is determined by all the national federations at the next Assembly and not by the FEI president nor the FEI executive Board. With Haya's request for resignation, the FEI sent out a clear message about its dissatisfaction with the current one.

The FEI Executive Board has proposed the appointment of an Ad Hoc Working Group of world class dressage experts from all aspects of the discipline to review key issues and inject a new focus in the sport.

At the forthcoming FEI General Assembly taking place in Buenos Aires (ARG) on 17th – 21st November, the Ad Hoc Working Group remit will be proposed for discussion and approval by the FEI Bureau.

The status of the members of the current Dressage Standing Committee, who have been called upon to resign, will be an issue for FEI member National Federations to address through the FEI Bureau and General Assembly as appropriate.

The German website SMS-Pferdenews discloses more info concerning this Ad-hoc committee. It states that Kemperman has been appointed chair of the new committee and that he will be in this position for one year as of the General Assembly. Kempermann is the director of the biggest equestrian show of the year, the CHIO Aachen, and has the Dutch nationality. The German Equestrian Federation, which opposed Haya's request, is aware that Kempermann has been asked to chair the ad hoc committee.