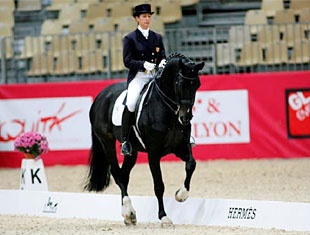 Haddad, who placed fourth behind Van Grunsven (NED), Werth (GER) and Van Olst (DEN), was rewarded with a special trophy by one of the sponsors of the event, Generali Assurances. The insurance group offered the Coup de Coeur prize for the horse and rider pair that most captured the heart of the crowd during the Freestyle.

In a stadium packed with almost 5000 spectators, members of the VIP section were asked to vote on the recipient of the Coup de Coeur trophy. Haddad and Cadillac were unanimous winners. "I'm deeply honored," said Haddad after the prize giving, "At first I didn't really understand what I had won since my French is very limited, but after a lot of people came to offer their congratulations and translations, I was really, really moved by the award."

Haddad was sincerely complimented on her connection with her horse and her obvious happiness to be riding in Lyon. “We did not completely agree with the judges” said the commentator about the decision to award the Coup de Coeur to Haddad. “Catherine and Cadillac moved us the most.”

“It speaks to the authenticity and passion of the French people that they put so much emphasis on the heart,” said Haddad “especially in connection with dressage. I do love my horse and I am a bit overwhelmed to actually be recognized and rewarded for that even though we weren’t the technical winners today!”

“We riders have to remember that unlike the Freestyle, Grand Prix is not really a spectator draw for the layman. The freestyle to music is our biggest chance to connect with spectators from all walks of life and the greatest promotion for our sport. So we have to put our hearts into it. I always keep this in mind when I choose music and choreograph a Kür.”