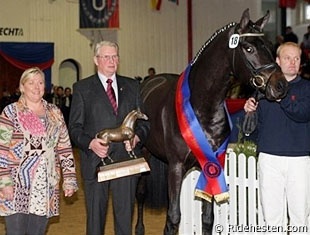 The dark bay stallion Furstenball became the champion of the 2008 Oldenburg Stallion Licensing in Vechta, Germany, November 22, 2008. Owned by the Danish Lone Boegh Henriksen, Furstenball (by Furst Heinrich x Donnerhall x Classiker) was the only stallion which impressed all three days of the licensing.

Furstenball is bred by Georg Sieverding, who also bred last year's licensing champion Sieger Hit. Two years ago, the Danish Henriksen purchased the young colt at the Vechta Elite Foal auction for the record price of 110,000 euro. A bold enterprise which clearly paid off as Henriksen sold half-ownership to Paul Schockemohle on the final day of the licensing for a rumoured gigantic amount of money.

Reared and prepared for the licensing by Henriksen's steady trainer Johannes Westendarp, Furstenball dazzled the judges on the hard surface and lunge line with powerful, engaged and elegant gaits. In freedom he moved with much expression and for a dressage stallion, he made an ok jump. In the premium ring, Furstenball was the only stallion to show such a ground covering, clear walk while maintaining a perfectly calm attitude in the testosterone filled stallion ring. 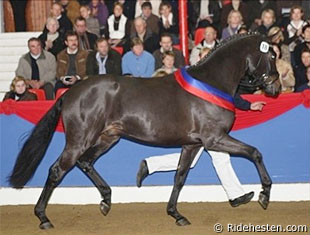 Furstenball was one of the crowds' favourites though few people expected him to become champion based on the judging politics of the stallion committee. The stallion is maybe a bit weak in the pasterns and his powerful engine behind needs to be developed more by training, but his elegance, suspension and looseness was untouchable at this year's licensing.

The stallion committee chose wisely by placing this colt first in the premium ring. The owner also resisted all pressure from people closely involved with the Vechta organizers to put the stallion in the auction and from major stallion stations which wanted to buy him for a good price. She waited until after he was licensing champion before she sold half of him, for marketing purposes. 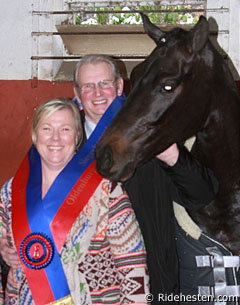 "I just couldn't believe it, people said Furstenball was the champion and I just couldn't believe it. They had to tell me three times," Lone Boegh Henriksen said. Henriksen runs a small breeding facility, Tvedegaard, in Hillerod, Denmark, where she breeds five to six foals a year. Her goal is the combine performance with beauty and elegance. She is also the owner of the premium stallion Rosentanz (by Rohdiamant x Sau Paulo) and Hoftanz (by His Highness x Rotspon).

The reserve champion of the licensing was Xavier Marie's dark bay Sir Donnerhall x Rubin Royal x In Extenso colt. Some expected this super moving stallion to become Champion as owner and breed Marie of Haras de Hus is one of Vechta's foremost customers, but the colt landed a well earned second place. The bay with four small socks had a very good walk and a powerful trot with tons of flexion in the hocks and lots of knee action. At times he moved a bit Hackney-like, loosing throughness in the back, but in the premium ring and especially in the auction, he showed himself at his best. The colt sold for 130,000 euro to Spain.

The third placed stallion in the premium ring was Gestut Vorwerk's fantastic chestnut Dimaggio x Landadel x Fürst colt. The long legged liver chestnut stallion impressed with his uphill model and lovely freedom in the shoulder. His walk was just ok and in trot, the stallion could flex the hocks more, moving towards the gravitation point, but in general this stallion, bred by Heinrich Schütte, was a stunner. Vorwerk confirmed the news that Dimaggio has returned to England after a breeding lease of a few years and that this young colt will be his replacement at the station. For 2009, Vorwerk will also be standing Statesman, the Stedinger x Donnerschwee stallion which sold for the record price of 400,000 euro to Luxembourg at the Vechta Autumn Elite Auction.

Thirty Oldenburg bred stallions out of forty-four presented were licensed. Ten stallions made it into the premium ring, not all deservedly so. Quite a dissapointment was the Sir Donnerhall x Painter's Row xx, which finished fourth. Though he has a beautiful head and neck, the topline was very plain. This stallion is long in the back and flat in the croupe. His long legs failed to impress with weak hindquarters that were quick but not carrying any weight. His auction price of a mere 35,000 € said enough and Paul Schockemohle bought him. Maik Kanitzky's Sir Donnerhall II (by Sandro Hit x Donnerhall x Feldherr). The normal looking full brother of the much praised Sir Donnerhall I was very nervous and moved with the hocks close together as if they were almost touching each other. His walk was mediocre. The naughty but decently moving premium colt by Furst Heinrich x Welt Hit I x Guter Stern sold for 33,000 euro to Matthieu Beckmann in Wettringen, Germany.

Two remarkable licensed stallions who did not make it into the premium ring were the Donnerball x Weltmeyer x Grenadier and the Florencio x Sandro Song x Absinth colt. The Donnerball was gorgeous to look at but could have been carrying more weight behind. He sold for 75,000 euro to Westfalia. The Florencio moved with much suspension and power and sold for 52,000 euro to the veterinarians and breeders' syndicate of Equine Clinic De Nethe (Veronique Swagemakers, Lieve Berthels, Bas Donker) and Wies Van de Boer. He will be stationed at De Nethe in Mol, Belgium, after doing his performance test in Germany. 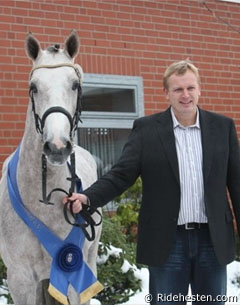 The sensation of the auction was the sale of the Show Jumping Licensing Champion Le Champ Ask, a grey colt by Last Man Standing x Contender x Lorenz. In a tough bidding duel between the Danish Blue Hors Stud and Tailormade Horses, Esben Moller of Blue Hors secured the deal stopping the hammer at a price of 1,100,000 euro, the absolute record ever achieved at a German Breed Society auction. Bred by Reinhard Mahnel, this grey colt impressed with his astronomical jumping potential.