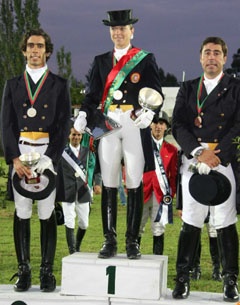 Maria Moura Caetano won the Grand Prix title at the 2008 Portugal Dressage Championships, held at the Sociedade Hipica Portuguesa in Lisbon, Portugal, October 10-12, 2008. With scores of 73,65% in the Grand Prix, 65,96% in the Grand Prix Special and 67,08% in the Kur to Music, Caetano totalled 206,69% with her horse Diamant (by Donnerhall) and grabbed her first national Seniors title.

Maria, who is trained by her father Paulo Caetano under the supervision of the German trainer Dolf Dietra Keller, rode her Kür to "Applause" a composition created by Karen Robinson, designer of some of several Olympic freestyles.

Last June at Ponte de Lima, this promising combination claimed the "Taça de Portugal", an important achievement and certainly a first of many to come.

From a field of 12 participants in various qualifying rounds this year, only four managed to qualify for the Grand Finale. The scores attained by the four combinations were very close to each other and provided a good level of dressage to the many spectators that attended the Championships.