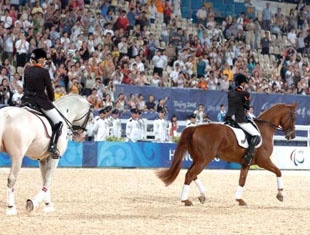 It was a complete repeat of Monday’s podium, but the performances clearly left the crowds moved and enchanted. When South Africa’s Philippa Johnson and Benedict took the lead, and even before their score of 77.272 was shown on the screen, the crowds simply erupted into a huge applause.

They performed a truly remarkable and breath-taking freestyle to the sound of the Exodus theme song and stole the show. This provided Philippa with her second gold medal and effectively placed South Africa third in the medal count!

As with the Individual Championship podium, Norway’s Ann Cathrin Lubbe and the atypical and charming Zanko picked up their second silver medal at these Games, having also both competed in Athens – and her delight at winning the silver medal and in particular that such a good friend and competitor had won the gold was yet another sign of the genuine sporting fever which seems to overcome all the athletes at the Paralmypic Games.

For third place, it was Australia’s Georgia Bruce and the elegant Victory Salute to the tune of Fiddler on the Roof – a déjà vu following Felicity Coulthard’s performance earlier in the evening. For Georgia Bruce this was an extraordinary achievement, two bronze medals on a horse with whom she has had little time to train, but it’s clearly a great partnership in the making and given the chance she would certainly be ore than happy to develop it further.

“My horse was very good in the freestyle,” said Brueckmann of the 7-year-old Trakehner gelding. “He’s learned a lot for the future, for the World Equestrian Games. He’s a young horse and he needs to be more mature in the upper level movements. The competition level is very high, and I’m very proud to be here.”

The Summerfield, NC rider was representing the US in her second Paralympic Games. Brueckmann has reflex sympathy dystrophy in her right leg from a fall on the ice, she has paralysis in that leg as a result and she rides without stirrups. She thinks that there is a huge future for her horse.

“This has been much more exciting,” said Brueckmann of comparing the two experiences. “I’m looking forward to 2010 and he’ll be ready for London in 2012.” 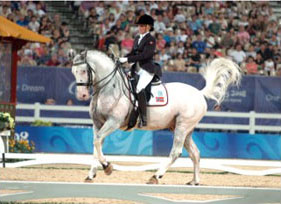 For the superstitious, Philippa Johnson (RSA) and Benedict may have just confirmed the lucky attributes of the number 8, and if it’s considered lucky by the most populous nation in the world… then now is the time to start making plans. Indeed, she was 8th to go, scheduled for 8:26 on the 8th of September… and low and behold, she is now the ecstatic recipient of South Africa’s first ever gold medal at equestrian events of the Paralympic Games. Silver went to Athens gold medallist Ann Cathrin Lubbe from Norway riding the nonchalant, ever so gentlemanly Zanko, while bronze was picked up by one of the younger athletes competing at these Games, Australian rider Georgia Bruce.

Of course, for gold medallist Philippa Johnson, this is her second Paralympic experience and she did win silver the first time around, so whether or not the 8 had anything to do with it, is entirely debatable… She stands as an inspirational figure for South Africa and this year leads by experience the first ever South African team at the equestrian events of the Paralympic Games. Her win tonight will no doubt prove to be encouraging for many of the up and coming South African Para-equestrian athletes.

“One of the most wonderful things about Paralympics and other disabled sports is that … everyone is out here to help each other. It’s about comraderie and working together and it’s about giving back to your sport.” A sentiment which was clearly echoed at the press conference as silver medallist Ann Cathrin Lubbe congratulated the new title holder for her genuine and brilliant performance.

For Georgia Bruce, winning with Olympic shortlisted horse Victory Salute was a fantastic experience and it symbolises a coexistence of Dressage and Para Dressage riders that needs to be further developed.

Some notable performances were had this evening and in particular, four time paralympian Nathalie Bizet from France who paced fifth riding Mephisto and is planning a Tango for the freestyle. Indeed, there is still a lot at stake for the Grade IV riders, whom following a day off tomorrow will be back in the arena for the enchanting and mesmerising freestyle competition.