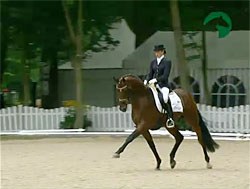 The Trakehner licensed stallion Imperio (by Connery x Balfour xx) has taken an early lead in the 5-year old division at the 2008 Bundeschampionate in Warendorf, Germany, September 3, 2008. Under Anna Sophie Fiebelkorn, the bay stallion produced a lovely, correct test earning high scores from the judging panel.

The top twelve ranked horses qualify directly for the finals, the others go to the consolation finals on Friday where the top three placed horses can still obtain a ticket for the 5-year old finals on Saturday.

Imperio was a league of his own in the 5-year old qualification round. The bay stallion moved with such lightness, rhythm, and power. In trot he was engaged with a swinging back and outstanding suspension, the walk was forward, active and ground covering. In the counter canter left there was quite a lot of bend in the neck and the transition to canter in simple changes could have been a bit quicker off the aid, but in general the canterwork was uphill and energetic. 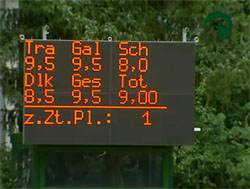 The highlight of the test was the final trot where the rider was lengthening the reins in posting trot. Imperio really chewed on the bit, stretched his neck and there was absolutely no loss in rhythm, expression and power. Imperio scored 9.5 for trot and canter, 8.5 for walk, 8.5 for submission and 9.5 for general impression. His total of 9.0 put him in the lead.

The second place went to the Westfalian reserve licensing champion Rock Forever (by Rockwell x Landstreicher). Under Oliver Oelrich, the bay stallion showed off his three outstanding basic gaits. He was powerful and engaged in trot and canter and showed super overstep in the walk. Rock Forever was presented in a much better fashion than at the World Young Horse Championships where his rider was kicking, pulling and yanking the horse through the test. Their overall score of 8.9 justified the improvement. 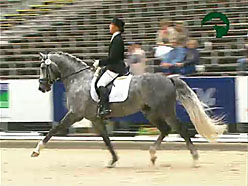 The third placed horse, Birkhofs Denario, excelled in rideability. Under Gestut Birkhof's in-house rider Nicole Casper, the grey licensed stallion by Denaro scored 8.8. Denario entered the ring whinnying but quickly regained his focus on the ride. The trot was light footed and elegant as the stallion has thing, long legs. The trot extensions were smooth and had good engagement. In canter, the stallion lacks some flexion in the joints. His canter looks limited in suppleness in the body and freedom in the shoulder, but Denario performed the counter canter and simple changes with perfection. The total image was gorgeous, light, controlled, in balance and the judges rewarded that.

Dorothee Schneider is a seasoned competitor at the Bundeschampionate, having won the 6-year old champion's sash several years ago with her now Grand Prix horse Kaiserkult TSF. With the lovely Hanoverian mare La Noire (by Londonderry x Alabaster) she has the quality again to become winners. La Noire scored 8.7. 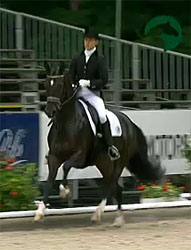 Kira Wulferding followed in fifth place aboard Sissy Max-Theurer's Oldenburg mare Della Cavalleria OLD (by Diamond Hit x Rubinstein I). The trotwork was super. The dark bay mare was quick behind, moved the hindlegs towards the gravity point and stayed consistently light and soft in the hand. The extended walk was ground covering and the mare really stretched her body, but she tends to take longer steps with her left hind leg. She also had some difficulties keeping the clarity of rhythm in the collected walk. The canter work was very controlled and free in the body. They scored 8.6.

The same points were achieved by Anja Engelbart on the Oldenburg licensed stallion Diamonit (by Diamond Hit x Santander). Owned by Tony and Sarah Pidgley, Diamonit moved with much uphill expression in the collected trot, but could have pushed the hindlegs more under the body in the extensions. The canter lacked the uphill tendency and especially in the extended canter the croupe came up too much. In the simple changes, Diamonit lost some clarity in the rhythm, but the extended walk had much overtrack. 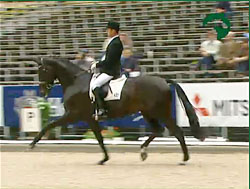 Ulf Möller and the Hanoverian mare Donna Weltina (by Don Frederico) received 8.5 from the judges. In one month time, the mare has improved much compared to her performance at the World Championships. She looked more confident in the ring, pushing herself off the ground with lightfootedness and her hindlegs actively tracking up. The canter could have been a but more expressive and uphill, but the mare made wonderful simple changes and always kept a good balance and rhythm.

The horses which were expected to land all the way at the top of the leaderboard, Desperado OLD and Silberaster OLD, failed today. Nadine Plaster and her ponyesque Oldenburg gelding Desperado (by Dressage Royal x Roulette) had some trouble in the corner at H where the gelding spooked during the rein back. 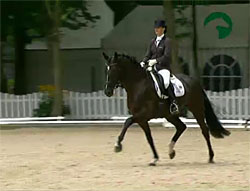 He also lost his balance in the counter canter and twice made a flying change. Despite these mistakes, Desperado looked fresh, energetic and light in the hand. They'll have to try to get a ticket for the finals in the consolation round. Helen Langehanenberg had her hands full with Silberaster OLD who was not in the mood to perform at all. As soon as Langehanenberg made her salute at entry, the mare went into tilt-mode. She was resistent in the contact with the bit and against the leg. Let's try again on Friday!