Rodrigo Pessoa's Rufus Tests Positive to Doping at the 2008 Olympics 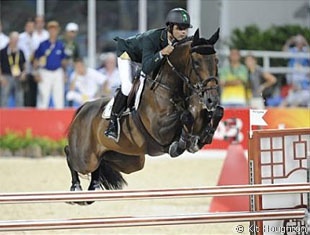 The FEI has received notification of an additional and final doping/medication case at the 2008 Olympic Games involving rider Rodrigo Pessoa (BRA) and his horse Rufus.   A test carried out on the horse following the individual final revealed an A sample

The sample was received by the laboratory on Saturday 23 August following the individual Jumping Final at which Rodrigo Pessoa and Rufus placed fifth. A preliminary hearing was held by teleconference at 17h00 on 28 August before a member of the FEI Tribunal and the suspension was confirmed on 29 August.

The B sample test is scheduled for Tuesday 2 September in Hong Kong.

Evidence and written submissions will be requested and a hearing will be held before the FEI Tribunal. However it is up to the Person Responsible whether or not they wish to exercise or waive their right to be heard. The panel will then, in light of all the evidence received, take a decision as to the applicable sanction if any.

An update will be provided by the FEI following the result of the B sample and subsequently further updates regarding the hearing and final decision.

The competition results will be amended as indicated in the Tribunal’s final decision.