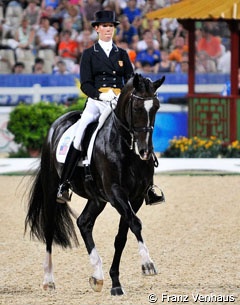 The FEI has announced that an additional doping/medication case at the 2008 Olympic Games was detected. Courtney King's (USA) Mythilus tested positive for the banned substance Felbinac, considered a « medication class A » prohibited substance.

Felbinac is applied topically for the relief of local pain and inflammation and belongs to a group of medicines called non-steroidal anti-inflammatory drugs (NSAIDs).

Courtney King, who placed 13th individually in the Dressage competition, was officially notified on the morning of 22 August of the positive test result and the decision for provisional suspension was upheld that evening at a preliminary hearing before one member of the FEI Tribunal.

Given that the Dressage events of the 2008 Olympic Games ended on 19 August it was decided to wait until the confirmatory B analysis prior to any public announcement of the findings. The FEI has now received confirmation of the initial finding from the analysis of the B sample.

Evidence and written submissions have been requested from each rider, and a three-member panel of the FEI Tribunal has been appointed.  Hearings will be held on 5, 6 and 7 September in Lausanne, however it is up to the Person Responsible whether or not they wish to exercise or waive their right to be heard. The panel will then, in light of all the evidence received, take a decision as to the applicable sanction if any.

An update will be provided by the FEI following the hearings (8 September) and final decisions will be announced prior to the end of the first week in October, provided the hearings can be held as scheduled. However, these deadlines are indicative timelines, and may be affected by specific circumstances as with any legal proceeding.

The competition results will be amended as indicated in the Tribunal’s final decision.