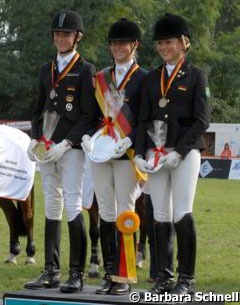 Sanneke's pony Konrad was also officially retired from competition at the Championships in Hannover. The 18-year old multiple medal winning pony will now be a schoolmaster for Semmieke Rothenberger, the youngest of the family.

Konrad was one of Germany's most successful FEI ponies ever. He took five different riders to individual European medals!! He won his first European gold with Nikolas Kronke at the 1997 Europeans in Hartpury, England (Nikolas is feeding Konrad on the photo). Sister Kira Kroncke (the girl with the black hair) took over the ride and won team gold and individual gold at the 1999 European Championships. He then won silver with Annika Fiege in 2002 and under Patricia Hohn he won silver (2003) and bronze (2004). Sanneke won individual silver with him in 2005.