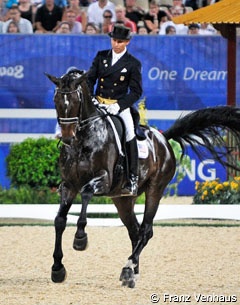 Leading up to the Olympics, German born American Steffen Peters was pinned as the best individual medal hope for the US in recent memory. Riding 10-year-old KWPN gelding Ravel (by Contango), Peters put in a grand performance in the horse’s first effort outside the US.

Upon entry, Peters spurred his horse forwards like Ravel former rider Edward Gal sometimes does, with flopping legs visibly squeezing to the rhythm of the horse. Peters continued in a gorgeous passage, followed by a very rhythmical piaffe in which the knees of the front legs still should come up higher. Though Ravel is already 10, he is very green at Grand Prix level which shows in occasional loss of balance, in the lack of straightness in the tempi changes and in the piaffe which has enormous potential and which will become more established, relaxed and big with years to come. In the two tempi's, Ravel kicks to the spur and did not stay straight in the body but was swung from left to ride to accomplish the changes. The one tempi's on the curved line were much better. The double pirouette to the right was big, the one to the left much better. The extended canter flowed into a pirouette right with a transition to piaffe was proof of a good level of technical difficulty. In walk, Ravel had good overstep of 2 hooves, but could have stretched more in neck and body.

Peters' music for the piaffe and passage is a well chosen Hawaiian sounding version of Guns 'n Roses' Sympathy for the Devil, but his other musical option, the Safety Dance, reminds of poor muzak background music. The combination improved more and more towards the end of the ride. The final trot half pass to the left was super but Ravel's tail was swooshing heavily. The passage half pass to the right was great as well as the piaffe which had much sit and a great rhythm. The final piaffe pirouette and passage were totally to the rhythm of the music. A lovely performance by such a "young" combination. They placed third with their kur (76,500%) above Heike Kemmer but overall finished fourth with an average of 74.150, just 0.305 points behind the bronze medal.

“There was a tiny bit of tension in the two-tempis,” said Peters. “I had to risk it, so fourth place at the Olympic Games is not so bad. My horse lived up to my expectations one hundred percent.”

"Sometimes you have dreams,” said Peters who lives in San Diego, CA. “Today felt like a dream and I felt like I was in charge of it, it just wasn’t quite enough for the bronze. You have to go for it but you also have to be realistic.”

Ravel is owned by Akiko Yamazaki, wife to one of the founders of the internet company Yahoo. She purchased the horse as a stallion from Reesink Horses and Tim Coomans in the Netherlands. He was quickly gelded after his arrival in the States, because "Ravel was so stalliony that he even mounted a wheelbarrow," Tim Coomans once told Eurodressage. Ravel is America's hope for an individual medal at the 2010 World Equestrian Games held in Kentucky, USA. 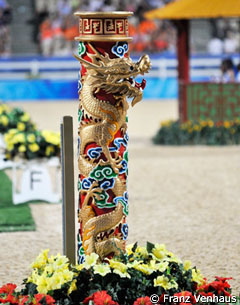 “This is a great stepping stone for Ravel,” said Peters. “I feel like there is a big future for him.”

All the commotion concerning Riexinger's judging, which had already led to two "secret midnight meetings" between FEI Technical Delegate Mariette Withages, the judges and representatives of only Germany, the Netherlands, USA and Denmark, flared up during the kur press conference with the American empowered by the fact that Riexinger scored Peters the lowest of all five judges. On a technical level, Riexinger was only 0.1 point lower than Tornblad and Furuoka, on an artistic level Riexinger was 0.2 points lower than judge Fouarge. The point discrepancies were not huge but in ranking Peters placed third with most judges and eighth with Riexinger. Plenty of gunpowder to ignate a bomb...and the explosion is not over yet as the FEI has announced to investigate the issue.

Two Americans made it into the individual finals and the baby on the team, Courtney King-Dye, was the second one. King-Dye and Mythilus, a 13-year-old KWPN gelding by Ferro, owned by Harmony Amateur Sports Foundation, performed to music of Cat Stevens. It was based around one of King-Dye’s favorite songs, Sad Lisa, although new canter work was composed since she last performed her freestyle at the American Olympic Selection trials. In general, King's kur sounded like an emulation of Wibi Soerjadi piano freestyles, the new European trend initiated by Imke Schellekens-Bartels and poorly copied by Anky van Grunsven. It is very elegant music fitting for Mythilus but it doesn't stick. 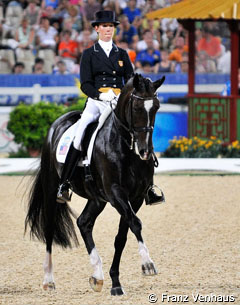 King's test had a couple of costly mistakes that kept her score lower than expected. Her freestyle score of 69.55% gave her a final score of 70.175%, which slotted her in thirteenth. Mythilus is a very elegant, light footed horse but he lacks stretch in his body. In the extended trot he needed to have more overtrack and in the second extension there was not enough swing over the back, the canter pirouettes were lovely, but the one to the left lost impulsion. In the extended canter he covers ground, but does not really lengthen his frame. The final piaffe and passage were brilliant.

“I was really happy,” said King-Dye after her test. “I had a mistake in both the twos and the ones which were very expensive. I took some chances and had some mistakes. It was a new kur but I think it is a great one for the future. I did the best I could and he was the best he could be on the day.”

King-Dye thinks that Mythilus may have lost a little bit his sparkle after such and intense few weeks but she is excited about the horse’s future. King-Dye was competing in her first Olympic Games, and although she will not take a medal home, she learned more than she ever imagined.

“I loved coming here,” she said. “The team unity, being part of this team was a fantastic experience. I learned so much as an athlete.”