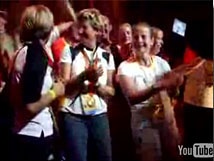 After the team medal ceremony which took place at the Hong Kong Jockey Club on Thursday evening August 14, 2008, the medallists traveled back to their Riverside Regal hotel for an evening of celebration and partying.

The Dutch camp gathered in the Holland Olympic Club and one floor down, the Germans and Danes were feasting together. Later on in the evening, the Dutch came down one floor and it became a communal party where the riders were no longer competitors but friends.

In the Olympic blog on her official website, Imke Schellekens wrote: "after the medal ceremony, which took place in the stadium at 23.30h, we arrived at the Holland Olympic Club round one o' clock, where a big group of Dutch fans were waiting for us. So cool and it was a cosy party. I was secretly kidnapped by Wolfram Wittig (trainer Isabell Werth) to have a party together with the Germans and Danes. It was a top evening!

Click here to watch a YouTube video of the Germans, Dutch and Danes partying together. The man in white going ape is German Olympic eventing champion Hinrich Romeike, who is a dentist by professional and has the amateur eventer status!