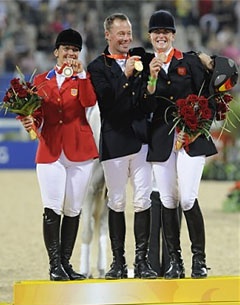 Germany took individual and team gold at the Olympic Eventing finale at Sha Tin stadium in Hong Kong this evening, but not without a terrific battle to the very last.

The Australians challenged for the team honours with all of their might, but had to settle for silver while the British stood firm to take bronze, and it was Hinrich Romeike and the extraordinary Marius who won through to take the individual title head of America's Gina Miles and McKinlaigh, with Britain's Tina Cook on Miners Frolic claiming individual bronze.

The tension-filled team decider was a thriller all the way, with just 10 clear rounds over the clever track created by Leopoldo Palacios in conjunction with Mike Etherington-Smith and Steve Stephens - and two of these were produced by German riders. The bogey on the 13-obstacle course was the green oxer at fence seven, while the final line of oxer to double also claimed plenty of victims. The dog-leg line from the oxer at eight, which had a right and left-hand option, proved the undoing of many who failed to find the correct distance to the following planks, and the questions asked by the intriguing course-plan were all about control, trust and the willingness of horses to give of their all one more time.

Despite losing two of their five team-members due to horse injury yesterday, the three-strong Swedish side fought like tigers to stay in the game and did even better than that when moving up from fifth to finish fourth ahead of New Zealand.

The Italians were lying just one place off a medal as the competition began, but four fences down for Susanna Bordone (Ava) and three on the floor for Roberto Rotatori (Irham de Viages) sent them plummeting to sixth while the USA remained in seventh as the Irish finished eighth.

Triple errors from three of their team members ensured the Canadians remained in ninth while Brazil finished 10th. And Eventing fans will remember this Olympic Games for the quality of both horsemanship and horse-power. The days of haphazard Eventing show jumping rounds are long gone - professionalism and style were delivered at every turn tonight - it was a triumph for the sport in every way.

The Brazilian side was also reduced to just three in the closing stages, but they battled on bravely to finish with 334.10 on the final scoreboard - Marcelo Tosi producing one of those very special clears with the aptly-named Super Rocky. The Canadians registered a total of 321.00, while the Irish, on 276.10, were upbeat despite failing to make any improvement from overnight eighth - their new team manager, former Olympic champion Ginny Elliott, looking forward to a promising future and particularly delighted with the results produced today by Geoff Curran and Kilkishen who picked up just two time faults and Austin O'Connor and Hobby du Mee who stayed clear and went through to the individual final.

The Americans completed with 250.00 points and Gina Miles' clear ensured that she would feature prominently in the following individual medal drama.

Sweden meanwhile was on the rise thanks to gutsy rounds from both Dag Albert (Tubber Rebel) and the wonderful 18-year old Stand by Me ridden by Linda Algotsson who left all the timber intact so that Katrin Norling's five faults with Pandora was all they had to add. The time-allowed of 94 seconds was hugely influential throughout the competition.

And there was another unique moment tonight when the "come-back king", New Zealand's Mark Todd, recorded the best Kiwi result when collecting just a single time penalty with Gandalf to underpin an amazing return from his eight-year retirement. But it was deep disappointment for the Italians who had been so brilliant on cross-country day but who now sadly slipped two places. Not even two clear rounds, from Fabio Magni (Southern King) and Vittoria Panizzon (Rock Model), could keep them up at the sharp end when Bordone and Rotatori ran into trouble. 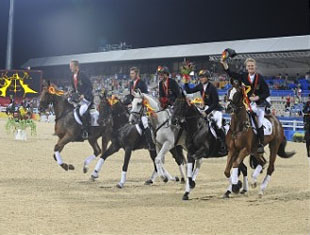 The real battle was played out between the leading Germans at the head off affairs and the Australians who were just over three points in arrears as the evening began while the British, just over 10 points further adrift, were ready to rise up from bronze medal position if those ahead of them faltered.

Sharon Hunt and Tankerstown hit the final element of the triple combination at fence five, Daisy Dick and Spring Along picked up 11 faults and William Fox-Pitt and Parkmore Ed fell foul of the tricky distance between eight and nine, the planks at the latter hitting the floor. Tina Cook produced the only foot-perfect British performance with Miners Frolic while Mary King's Call Again Cavalier collected eight to leave the British with a completion score of 185.70 and guaranteed the bronze with a 45 point advantage over the fourth-placed Swedes.

And it was a game of cat-and-mouse between the Aussie and Germans – Shane Rose kicking off the Australian effort with an eight-fault result with All Luck and Peter Thomsen replying with just a single mistake from The Ghost of Hamish at the bogey oxer at seven before Sonja Johnson came back to redress the balance for the Aussies with a fabulous clear from Ringwould Jaguar.

Now the pressure was back on the Germans, but they measured up with clears from both Frank Ostholt riding Mr Medicott and Andreas Dibowski with Butts Leon so that Lucinda Fredericks' two time faults with Headley Britannia and her husband, Clayton's, single error with Ben Along Time began to make the Australian challenge look weaker.

Germany's Ingrid Klimke was another victim of the planks at nine for her only mistake with Abraxxas but by the time Australian anchors Megan Jones and Irish Jester lowered the bogey oxer at seven it was already clear that Germany had the gold in their grip. Hinrich Romeike's last-to-go effort with Marius would secure the final German tally at 110.50 points and he would go into the individual final in pole position.

A simpler track with just nine fences faced the 25 through to the individual final, but only 11 managed to leave them all in place. With each country now only entitled to field a maximum of three riders under the new Olympic individual formula, the top-10 included three Germans and three Australians and there was less than a fence between the top seven.

Lying seventh, Tina Cook applied the heat on the remaining six when producing a flawless run with Miners Frolic to register a final score of 57.40. And when Clayton Fredericks and Ben Along Time caught the first element of the influential penultimate double, the British rider began to move up the order.

She improved even further when Andreas Dibowski and Butts Leona hit both the oxer at seven and the second element of the double at eight but Gina Miles halted her progress when the American's 14 year old Irish-bred eased his way home without incident.

Third-last into the ring, Megan Jones knew there was no room for error and was looking good all the way to the very last where, to groans of disbelief from the crowd, Irish Jester clipped the rail for four very expensive faults and the end of an Australian dream. It seemed now that Germany, once again, would capture both gold and silver, Klimke lying second and Romeike heading the field although with only a fractional advantage. Klimke's chances were dashed however when, beginning to look a little weary, her fabulous gelding lowered the oxer at fence two and now only Romeike stood between Miles and that glittering prize.

But the German was partnering one of the great Eventing horses of our time and, despite a very nervous ride by his master, the gorgeous grey seemed to have the gold in sight himself. Romeike's eye for a stride was not as accurate as it had been in the previous round so Marius seemed to take command as he skipped home in the finest of style.

The story of the 2008 Olympic gold individual medal is all the more extraordinary for the fact that Hinrich is only an amateur. By day his time is spent in his dental surgery attending to his many patients so his riding is restricted to after-hours. "I ride after work, about 6 or 6.30pm" he explained, "I'm lucky because I have a few horses and I have a great groom to help me." So how does a part-time rider manage to beat some of the greatest professionals in his sport in the world? "I don't know the answer to that" Hinrich replied, "I just do it." 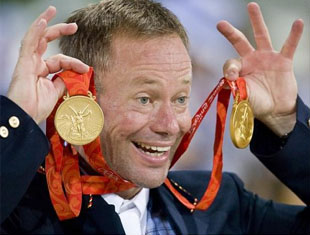 He knows he has been gifted in his partnership with Marius - "He is the one who did it today, I didn't ride well. My horse never makes a mistake, but I make many - today however not too many!" he added. And he was thinking about his family and friends back in Germany. "Tonight they are in my surgery with a big flat-screen TV watching this all happening and they will be drinking champagne - so why are we sitting here drinking water?" he quipped to the delight of his listeners.

Miles expressed her gratitude to the horse found for her at Punchestown in Ireland many years ago who has taken her to the very top. "McKinlaigh and I have grown up together and he has never had a cross-country jumping penalty during his whole career - we have been on a great journey and this is where it has taken us - I feel very lucky," said the rider who hails from California and was relishing a career-defining moment as she held her silver medal in her hand.

And bronze-medallist Cook said, "this is the realisation of a dream. I was originally on the reserve list and only came here because Zara (Philips) and Lucy (Wiegersma) couldn't - I always thought that if I got the chance I could show the world what I could do. Today I got that chance" she said with pride.