Disappointment for Clementino, Nilo Vo Does Not Pass Vet Check 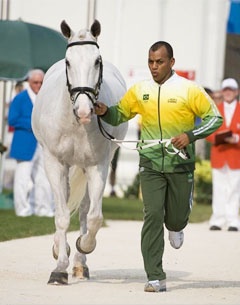 Clementino never even got to the starting-gate as his grey Lusitano stallion, Nilo VO, was re-examined by the veterinary team on Monday and declared too unsound to compete, to the deep disappointment of the 26-year who was really looking forward to being the first African-Brazilian to ride in equestrian Olympic competition. And this also puts paid to the chances of the Brazilian Dressage team as they already had only three riders.

"The hopes and dreams of Brazilian dressage fans were destroyed when Nilo VO sadly failed his veterinary re-inspection," Jean Llewellyn reported. "Yesterday, after being sent to the holding box with Rogério Clementino, the veterinarians decided he should be re-presented 24 hours later. On this occasion, Brazilian team coach Johan Zagers shouldered the responsibility for presenting Nilo to the veterinary committee, and after trotting him twice, and following an extremely lengthy discussion, it was finally announced that Nilo had failed."

Jean Llewellyn covered the re-inspection into detail for her blog and wrote down what happened.

A disappointed Victor Oliva said: “We are deeply sad. We have done very serious work for the last three years and that’s why I want to take everybody that took part, especially our coach Johan Zagers and veterinarian Neimar Roncati. Now we’ll support Luiza Tavares de Almeida and Leandro Aparecido da Silva who will certainly do a good job with their Lusitano horses. Tomorrow we will be less upset and we’ll start our Olympic programme for London 2012.”

Although the official veterinarians are not obliged to offer any explanation, they did say that their decision was based on frontal unevenness in Nilo’s paces which usually indicates a lameness issue. Naturally, this could be as minor as an ill-fitting shoe. Brazilian Chef d’Equipe Salim Nigri and the Brazilian team veterinary Thomas Wolff said they did not agree with the decision of the veterinary committee. According to Nigri, “At this second vet check, he really looked better and in our opinion he was in a condition to compete.”

Wolff added: “The withdrawal of Nilo was a surprise not only for us Brazilians but also for other delegations. Nobody expected Nilo to be rejected. Unfortunately, it’s a final decision.”

Despite the bitter disappointment for Rogério Clementino and Nilo’s breeder and owner, Victor Oliva, it should be remembered that even qualifying for an Olympic Games is an enormous accomplishment to which most people can only aspire!

FEI Technical delegate and FEI Dressage Committee chairwoman Mariette Withages commented to Llewellyn: “Brazil’s dressage team should already go into the Guinness Book of Records for having the youngest rider, the first black boy and, I believe, the team with the youngest ever average age."