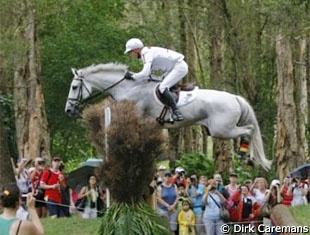 On a great day for the sport of Eventing, Germany took over at the top of both the team and individual leaderboards after the cross-country phase at the Olympic venue in Beas River, Hong Kong this morning when the Australians lost their grip.

Hinrich Romeike is now heading the individual rankings with Marius while fellow-German, Ingrid Klimke, lies close behind in second place with Abraxxas but the Aussies are stalking them, with Megan Jones in third and Clayton Fredericks in fourth.

Dressage leader Lucinda Fredericks dropped to 11th when the expectation that Mike Etherington-Smith's 29-fence 39-jumping effort course would suit the Australian rider's brilliant little mare, Headley Britannia, failed to materialise. And the Australian team slipped to second, although they are only trailing the leaders by less than a three-point margin going into tomorrow's Jumping phase which should keep spectators on the edges of their seats.

Lurking ominously in fourth spot after Dressage, the British bounced up into bronze medal position when the American team was hit hard by the elimination of pathfinders Amy Tryon and Poggio II and refusals for both Rebecca Holder (Courageous Comet) and Karen O'Connor (Mandiba) which sent them nose-diving from third to seventh place. Meanwhile the Italians improved from fifth to fourth, while Sweden now lies fifth ahead of New Zealand in sixth. 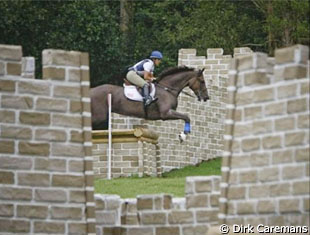 As if choreographed to perfection, returning New Zealand legend Mark Todd showed the way when first out on the course with Gandalf in ideal weather conditions. Gentle rain under cloudy skies created exceptionally horse-friendly temperatures, and although the rain became heavier toward the end of the competition, it failed to have much effect. When Britain's Mary King was asked how she coped with it during the brilliant second-from-last run with Call Again Cavalier which moved her into joint-fifth place with America's Gina Miles (MacKinlaigh), she replied, "The rain? I didn't even notice it, I was concentrating on riding because it was a very busy course and it didn't affect me at all!".

Todd showed he has lost none of his dash since coming out of his eight-year retirement from the sport he so enjoys and, like all of the riders today, was warmly cheered by spectators along the way. It quickly became clear however that, just as Etherington-Smith had predicted, the time-allowed of eight minutes would be impossible to get as the man crowned the Rider of the 20th Century by the FEI collected 27.20 time penalties on a foot-perfect, if sometimes exciting, run. And it didn't take long for one of the most influential fences to play its part - third to go, German pathfinder Peter Thomsen (The Ghost of Hamish) was the first of six riders to endure a run-out at the second of the two angled brush fences, numbered 27 and 28, which required great honesty from horses and total accuracy from riders at this very late stage on the track. "We learned from that," German team manager Hans Melzer commented afterwards.

Two horses later, American pathfinder Amy Tryon and the free-running Poggio II got into a muddle at The Birdcages table at fence 10 and parted company on the landing side. "It felt like he caught his right front knee on the way up and slipped across the top and then landed and stumbled and then stumbled again," she explained after this inauspicious start to the US effort. Clayton Fredericks and Ben Along Time however cruised around to take the early individual lead when picking up just 16.4 time penalties, the twists and turns and undulating profile of the Beas River track continuing to take their toll.

Gina Miles and MacKinlaigh went some way toward restoring the American equilibrium when adding just 16.8 time penalties to her scoreline and this was always going to move them up the leaderboard, but it quickly became clear that Lucinda Fredericks' gold-medal-winning dream was beginning to fade. To the amazement of the more knowledgeable onlookers, Headley Britannia found enough space between the two houses in the middle of the Five coloured Lake water complex at fence six to put in two strides where most horses found it a short one-stride distance. "I thought the track would suit her, but it didn't, it was much easier for horses with a longer stride," a disappointed Lucinda pointed out afterwards. "I found it difficult to get her opened out at the start of the course but over the second part she stretched her little body and her heart-rate was really good when she finished – in fact she went to the vet-box trotting because she just didn't want to walk!" she added.

Despite all the pre-competition anxiety about the Hong Kong climate, albeit that this was the kindest of Hong Kong summer days, many horses finished full of running.

Meanwhile the determined Didier Dhennin lifted French hearts with a great run from Ismene du Temple which added only 14.00 time penalties to his tally but for China's great hope, Alex Hua Tian, it all fell apart when he missed his stride with Chico at the Ya Hua Tai Rockery at fence eight and fell. Like a real professional however, the 19-year old accepted full responsibility for the mistake saying, "I am so disappointed in myself, it was completely my fault. The horse was perfect, I completely messed it up". Plenty of time for this talented young man to get it right in the coming years however, and anyway he was in good company. Because one of the most experienced riders in the world, New Zealand's Andrew Nicholson, was the next to hit the dirt, although it was the bogey hedge at the end of the track that put a stop to his gallop.

Hinrich Romeike on the other hand simply sailed around to stop the clock in 8.42 minutes for just 12.80 time penalties with the amazing grey, Marius, who, at 14, is competing in the sixth championship competition of his career. Asked afterwards if this cross-country run was his horse's best championship performance to date, a delighted Hinrich said, "his best round is always his last round - every round he performs is always his best!".

American chances took another hammering when Rebecca Holder's Courageous Comet seemed unclear about his instructions and ducked out at the Crouching Dragons at fence 21, an angled double that presented little difficulty to anyone else throughout the day. And when Karen O'Connor's Mandiba had two refusals - firstly at the difficult narrow third element of the Yu Garden complex which asked for a brave downhill ride from the previous hedge, and then at the penultimate Pagoda hedges at 27/28 - the US went into rapid decline. Disappointed and frustrated was how O'Connor described her feelings in the aftermath, but she believes she has a future star in this inexperienced nine-year old.

The British meanwhile were on the rise, bolstered by solid performances from Kristina Cook (Miners Frolic) and William Fox-Pitt (Parkmore Ed) and despite a 20-penalty addition for Sharon Hunt with Tankerstown at the dreaded penultimate hedge. Eric Vigeanel kept French hopes alive when jumping clear with Coronado and as the closing stages were unfolding Andreas Dibowski ensured German supremacy with a classy tour of the track with Butts Leon. The Germans now had three excellent scores on the board although the Australians had one more card to play as Shane Rose produced the fastest round of the day when crossing the finish in 8.23 minutes for just 9.20 time faults.

Mary King then rode yet another of those inspired rounds for Britain, smiling with delight most of the way around the course and putting her team right back in the frame. But the luckless French, already without two of their team members due to injury, suffered the most cruel fate of all when, last man on the course, Jean Renaud Adde fell at fence four, the inoffensive-looking Tiger Hill Log, to put paid to any hope of a team finishing score.

Megan Jones, who had the ride of her life to slot into individual third place with Irish Jester, put the Australian effort into perspective when she said that "today the time was impossible to get but we went out there and gave it everything we had," and, although overtaken by the Germans, the Aussies will be fighting all the way to finish tomorrow.

But Ingrid Klimke summed up the feelings of many of the best riders who took on the cross-country challenge today when she said "those eight minutes passed so quickly that I just wished I could go out again because it was so much fun!".

One of the first nice surprises of the day was the performance of Brazil's Jeferson Moreira. An army colonel, he competes only as an amateur but his sympathetic riding through the final stages of the course with the willing and brave Escudeiro reflected his comment when asked, after slotting into 51st place in Dressage, how he thought he and his horse might fare on cross-country day - "Oh, I think we'll do alright!". And he did, because, in the most elite of company, he is lying 45th going into the final day.

And the great clear round from Belarus rider Alena Tseliapushkina and Passat was another shot-in-the-arm for the sport which continues to attract and encourage the participation of sportsmen and women from nations not traditionally connected with this form of equestrianism.

As FEI President, HRH Princess Haya, said during the post-competition press conference, "this has been one of the most exciting days in our sport. The athletes have given us top-standard competition and the cross-country riding exceeded anything we have seen before. I am enormously proud and grateful to everyone for such a wonderful day." 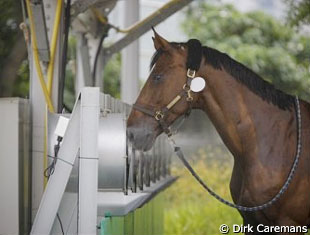 Olympic Cross Country day, 11 August 2008, shall certainly be remembered as a day of spectacular success, which was brought by years of in-depth preparation, planning and results, but also helped by luck. “We were lucky with the weather,” Foreign Veterinary Delegate Prof. Leo Jeffcott, who has spent three years monitoring the climatic conditions in cooperation with the Hong Kong Observatory, said. Indeed, with a temperature of around 25°C (80 °F), a cloudy sky and light rain, the weather was by no means extreme. Moreover, it remained stable throughout the morning which allowed for all the participants to compete under equal conditions. Humidity was high at around 70%.

“The horses were tired, some more than others, but all did finish well,” Prof. Jeffcott explained. All were taken to the cooling installations – cooling box and misting fans -  which functioned very well. Most teams took care of their own horses but help was provided whenever necessary; it proved very efficient. At approximately 41°C, the body temperature of some of the horses was rather high upon arrival. They were monitored until it went down to 38-39°C, a proof that the cooling had worked well. Some horses needed rehydration and were administered fluids. 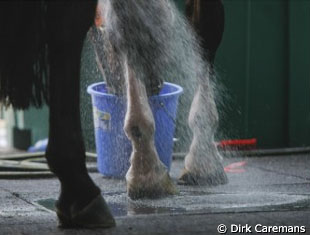 The only serious injury was that of Keymaster ridden by Magnus Gallerdal (SWE). Upon arrival in the cooling box, the horse seemed well. Subsequently, lameness on the right was noticed and a strained tendon was suspected. Ice and a bandage were administered. A horse ambulance was offered but Keymaster could walk by himself to the stable where the leg was X-rayed. A hairline fracture – a very small sliver or crack – on the pastern bone was diagnosed, which is not an uncommon injury at this level of competition. The horse was given painkillers and a strong bandage to support the injured leg. It will be transported to the equine clinic of the Hong Kong Jockey Club tomorrow by ambulance and an operation will be performed. In the meantime, Keymaster is comfortable and the Swedish team vet is well satisfied with the care provided.

Where the riders are concerned, there were several falls, but no injuries at all have been reported.

American baseball player Vernon Louis – Lefty – Gomez once said, “I’d rather be lucky than good.” Today horsesport in Hong Kong was both.