The Dressage Horses Stretch Their Toes 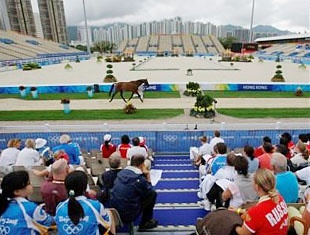 The horses that will compete in the Dressage competition of the Olympic Games later this week took their turn to trot before the Ground Jury and veterinary officials today at Sha Tin in Hong Kong.

A total of 54 were presented, and while some made a low-key appearance, others took full advantage of the opportunity to turn on the style and flash those fetlocks to maximum effect.

Sweden's Solos Carex, which will be competed by Tinne Silfven-Wilhelmson, was asked to trot-up twice but was subsequently passed while Daniel Pinto's Notavel, one of the three Lusitanos representing Portugal, was sent to the holding box but passed following further examination.

Brazil's Rogerio Clementino had a more anxious time, however, when his stallion, Nilo Vo, was unsound behind and the Ground Jury decided to ask for the horse to be re-presented tomorrow.

Meanwhile the German horses were wowing the spectators and enjoying every minute of it while Japan's Rambo, which will be ridden by Yuko Kitai, was feeling so good he ran almost all the way back to the stable yard with his handler in tow.

Korea's Cinque Cento really strutted his stuff for Junsang Choi, drawing gasps of delight from the sidelines, and of course Anky Van Grunsven's Salinero was ever the consummate profession, pointing those toes with distinction although handler Sjef Janssen led him away still performing passage because Salinero seemed to be so disappointed that his moment in the limelight was far too short.

There was an intake of breath when the Russian giant, Wat a Feeling took his turn.  His size alone makes him stand out from the crowd so rider Tatiana Miloserdova should have no difficulty in attracting attention in her test. And from the American line-up the lovely Brentina remained a lady as always for Debbie McDonald while Steffen Peters' Ravel, one of the most talked-about horses prior to these Games, behaved sweetly and obediently.

While Rogerio must wait to discover his fate, and that of the three-strong Brazilian team, following tomorrow's re-inspection, the Spanish team has already been hit by the withdrawal of Beatriz Ferrer Salat and Faberge so Spain will now be represented by two individuals – Jordi Domingo (Prestige) and Juan Manuel Munoz (Fuego XII). The remainder of the Dressage horses now have a further two days to continue their build-up before they enter the ring on Wednesday evening for the Grand Prix, which will decide the team medals after it is completed on Thursday. The best 25 riders qualify for the Grand Prix Special, which will take place on Saturday 16 August. The best 15 after the Grand Prix Special qualify for the Grand Prix Freestyle (Kür) which will decide the individual medals on Tuesday 19 August.