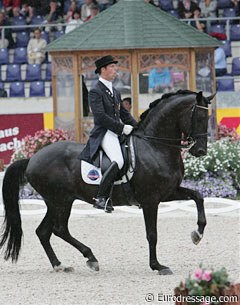 made his international Grand Prix break through this year. The 9-year old black stallion scored between 68 and 70% in the Grand Prix at the CDI De Steeg, CDIO Rotterdam and CDIO Aachen.

Previously owned by Paul and Ingrid  Inghels-Naessens, Withney was for sale this year and there was interest from abroad. Fortunately for Van Ingelgem, he was able to find a Belgian buyer who will keep the stallion in his training.

"He wants the horse to stay in our stable, so that I can keep training and competing him," Van Ingelgem told Eurodressage. "We are aiming for the Belgian Championships on short term and our long term plans are the 2009 European Championships, 2010 World Equestrian Games and 2012 Olympic Games in London. I'm extremely happy to be able to keep this horse."