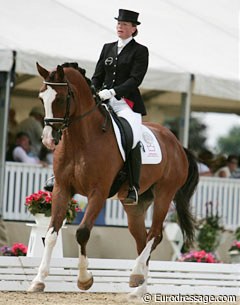 One just can't help but frown when looking at the ranking of NOH's Wizard on fourth place and Vivaldo on fifth. Vivaldo should have been more up and NOH's Wizard a few places down to do justice to their performance.

The Danish NOH's Wizard is sired by White Talisman, a 1999 World Championship participant under Morten Thomsen, and is out of a Ragazzo dam. The funny coloured bay gelding was professionally presented by Astrid Gemal who absolutely brought the best out of this horse. Wizard scores his points in trot by moving with good push from behind and with much rhythm, but his canter is his weakest gait. The stiff front legs and the failing hind legs led to four changes which either were bad or executed with much difficulty. The horse shows great rideability, though, and was visibly trying for his rider, but he was not the fourth best 6-year old at the championship. The judhes scored 8.6 for trot (ok), 8.5 for walk (ok), 8.2 for canter (too high), 8.1 for submission, and 8.5 for general impression (generous). Their total score of 8.38 slotted them in fourth. 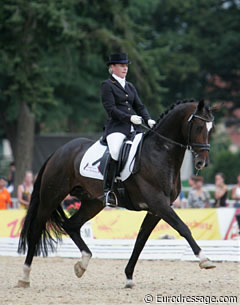 Slightly underappreciated was the Dutch warmblood stallion Vivaldo, who gave a lovely performance under Mirelle van Kemenade-Witlox. In ranking, he should have taken the fourth place probably, but the difference in points between the two was minimal. Owned by Stallion Station van Bommel, Vivaldo is by the Trakehner bred Polansky out of a Montechristo dam. The total image of this pair was lovely, though there was room for improvement here and there. In trot, the stallion could move the hind legs more towards the gravity point and he could have crossed his legs more in the half pass left, but the half pass right was lovely. What made Vivaldo's trot good was the clarity of rhythm. In the extended walk there was not enough overtrack but the collected walk had a good, active rhythm. Vivaldo was active in the hindquarters and cantered with much power. He did three really good flying changes and one change which could have been more ground covering. What made this test so nice was Vivaldo constantly being on the bit and on the vertical with enough room between the chin and neck. Overall it was a very good performance that could have been a bit more energetic and radiant. The judges gave Vivaldo 8.0 for tro, 7.8 for walk, 8.8 for canter, 8.3 for submission and 8.5 for general impression. Total: 8.28