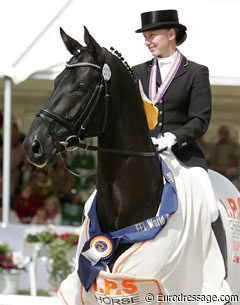 Fiona and Penny Bigwood's Hanoverian licensed stallion Dramatic won the 6-year old Championship at the 2008 World Championships for Young Dressage Horses in Verden, Germany. It was quite a dramatic disclosure of the final standing as the windy weather shuffled the rankings considerably. As Isabell Werth's trainer Wolfram Wittig whispered in our ear, "the weather will arrange it today."

In the first round Dramatic spooked a few times and got tense, which rider Jana Freund later blamed on the photographers. "It was the photographers," she said in the press conference, quickly adding, "but we need them so my horse we'll need to get used to them." They dived deep down in the ranking and had to redeem themselves in the consolation finals. Freund and Dramatic distinctively won those with an 8.64 score (higher than the winner's score in the first round) and were more than clear favourites for the title, if the horse would be able to keep his cool. They were the second pair to go in the Finals on Sunday August 3, 2008.

The black Hanoverian Dramatic was the favourite for the title, but faced very tough competition from last year's 5-year old gold medallist Cayenne W amongst others. He entered the ring showing a massive, huge, ground covering trot. The horse is naturally uphill, has a powerful, long hind leg with much freedom in the shoulder. The horse did loose some of its self carriage and balance, which showed in him getting deep in the voltes and the serpentine like right half pass. In walk, he actively moves forward with three hooves overtrack. In canter, one gets to see huge scope and ground cover. The flying changes looked very unconfirmed, the first was croupe high, the other three were either short or in two phases. The test ended with a final, extraordinary extended trot. 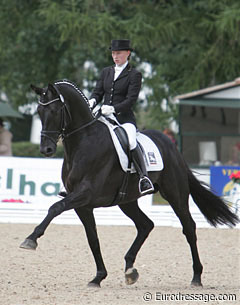 The judging panel, consisting of Eric Lette, Jennie Loriston-Clarke, Patrick Collard and Peter Holler were awed by Dramatic's superior quality of gaits. They scored the lofty trot a 9.6, the walk an 8.5, and the canter an 8.8. They praised the quality of the trot which was "unbeatable here at the World Championships." The panel would like to have seen more impulsion in the walk and in canter there should have been a more steady contact with the bit. The score of 7.8 for submission was overappreciated by the panel as Dramatic had difficulties staying on the vertical. He consistently went deep with his head and could have showed more collection and self carriage in the canter, which would have improved the flying changes.

In general, the biggest comment on Dramatic's performance would be that Freund presented him as a young riding horse and not as a confirmed M-level horse, which the judges did not enough reflect in their scores. For general impression, Dramatic received a 9.2. All these marks would be undefeatable by the other horses, making him the 2008 World Young Horse Champion in the 6-year old division. 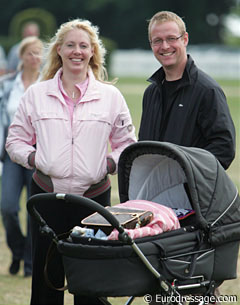 Rider Jana Freund was very happy with the victory and regretted the failed preliminary round. "He really caught me by surprise there as I didn't expect him to behave like that," she said. She also mentioned that Dramatic had his ups and downs here at the Championship, but was happy that he ended it with an up.

Dramatic is owned by British team rider Fiona Bigwood and her mother Penny, who buy young horses in Germany with potential Grand Prix talent "We've bought him as a Grand Prix prospect," Penny Bigwood told Eurodressage. "Grand Prix is what we look for."

Dramatic is bred by Reinhold Haferland and is by Don Frederico out of state premium mare Weltina (by Weltmeyer x Grenadier). The licensed stallion descends from the famous Wolgarune (by Wöhler) damline.