Diamantenbörse Shoots to the Top in 6-year old Qualifier 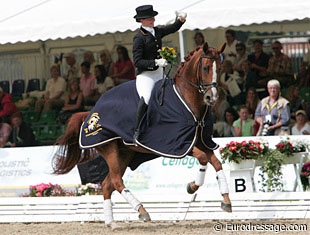 The Oldenburg mare Diamantenbörse shot to the top in the 6-year old qualifier for the finals at the 2008 World Championships for Young Dressage Horses in Verden, Germany, on August 1, 2008. The sympathic young rider Jessica Süss steered Ewald Lüttgen's mare with much professionalism through the ring.

It was the lightness and smoothness of the quality training combined with good basic gaits that led Diamantenbörse to the victory. Mirelle van Kemenade and Vivaldo ranked second, Brigitte Wittig and Bertoli W third.

The 23-year old Süss has been riding for the Lüttgen family since January 2007 and got in charge of the training of the then recently acquired mare Diamantenbörse. Two years of training has now resulted in the trophy in the preliminary test at the World Young Horse Championships. 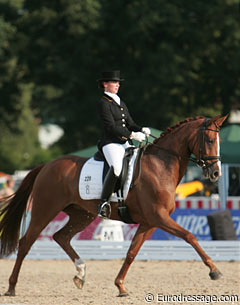 Diamantenbörse is a Diamond Hit x Rubinstein I offspring with a tremendous rideability. The trot is the mare's weakest gait with a lack of freedom in the shoulder. Though the rhythm and cadence is good, the mare lets the front leg fall quite plainly, which makes her silhouette less spectacular, and the gait failed in being collected. What she misses in trot, she makes up for in walk! The mare strides well, is ground covering and has a pure 4-beat rhythm. The judging panel, consisting of Eric Lette (SWE), Elisabeth Max-Theurer (AUT), Isabelle Judet (FRA) and Dietrich Plewa (GER), scored 'Borse's walk a 9, the only 9 given in that class that day. The canter was forward, well engaged with two well executed confirmed flying changes. The judges scored the trot 7.8, the canter 8.5, the submissiveness 8.5 and the general impression 8.7. Süss was the fourth rider to go in the class and scored 8.5 overall, a score that would not be beaten by the 36 following riders. 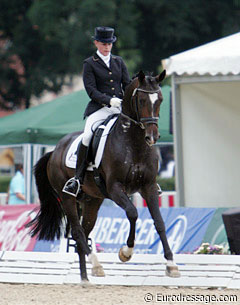 Dutch Mirelle van Kemenade returned to Verden with an improved KWPN stallion Vivaldo (by Polansky x Montechristo). Last year, nerves got to him in the 5-year old qualifier and he had a very stressy test that forced him to qualify for the finals via the consolation finals. This year, he looked confident and collected and finished second with 8.28. The trot showed great cadence, a good tempo with a constantly working hind leg. The traversal movements were beautiful with the legs crossing well. The walk was ok, but he could stride more powerfully. In canter, the horse moves uphill with scope. He earned 8.3 for trot, 7.8 for walk, 8.8 for canter, 8.0 for submissiveness and 8.5 for general impression.

Each year, Brigitte Wittig presents one of her own bred horses and they all impress in their quality of movements and their advanced training. This year it was no different with the Westfalian branded Bertoli W (by Breitling W x Diego xx). The six year old look like a ready Grand Prix horse in muscle and strength to self carry himself. The confirmed piaffe (and not half steps) he did in a moment of stress during the award ceremony gave away how much further Bertoli W is in training than a 'normal' six year old! 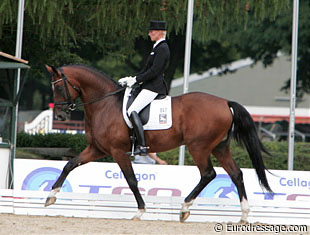 During his test, Bertoli W radiates confidence and his self carriage is exemplary. In trot he went through the movements with great ease. In the extended walk he had two hooves overtrack, but the clarity of rhythm could have been better. In canter he did an outstanding first flying change, but in the second one he jumped through the bit. He scored 8.4 for trot, 7.3 for walk, 8.7 for canter, 8.5 for submissiveness and general impression. Overall score 8.28 and he tied with Vivaldo.