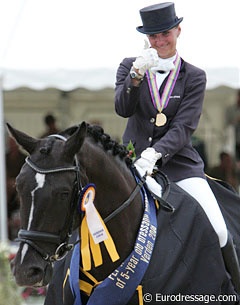 The Oldenburg gelding Desperado OLD and Nadine Plaster made a winning move in the 5-year old Championship at the 2008 World Championships for Young Dressage Horses in Verden, Germany, August 2, 2008.

The friendly pair from Baden Wurttemberg outscored the competition with their 8.84 overall mark. Anna Sophie Fiebelkorn captured silver with the Trakehner stallion Imperio, Helen Langehanenberg and the Oldenburg mare Silberaster OLD got bronze.

Nadine Plaster and Desperado rode quite conservatively but were absolutely correct in the execution of the movements. The horse could have moved with a bit more pizzazz, but the rider wanted to be sure that she rode correctly first. The walk pirouette was performed on the dot, the simple changes were relaxed and the walk came to full expression between the canter strides. Desperado is, however, a compact horse and there seems little room for opening of the frame in his body, while silver medallist Imperio is a large framed long legged horse with more flexibility in his body. 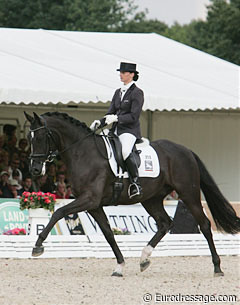 But Plaster rode the dark bay gelding with so much lightness and consistency. The contact with the bit was at all times soft and steady and the horse was on the aids. The judging panel, consisting of Truppa, Max-Theurer, Judet and Plewa, confirmed these findings. Desperado is a horse which moves with much "looseness, cadence and rhythm." Their main issue was that the hind legs could step up more under the body. They gave the pair 8.9 for trot and walk, 8.6 for canter, 8.8 for submissiveness and 9.0 for general impression. These marks totaled into 8.84 and the gold medal.

Plaster and her partner Simon Kohlenbrenner bought Desperado at the Vechta Elite Auction in October 2007 and formed a partnership with her horse real quickly. Within the year Plaster and Desperado became World Champions. "We bought him in Vechta and practiced hard over the winter. I won the World Championship qualifier in Warendorf and now the World Champions," said an ecstatic Plaster, who looked like she could hardly believe what had just happened to her. 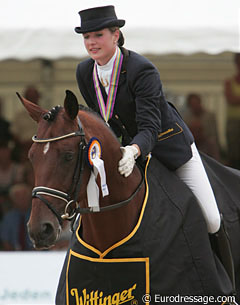 While Plaster played it safe, Fiebelkorn took risks and that paid off. She entered the ring with her horse fully charged up to produce. Imperio was active, engaged, marching forwards with great rhythm and cadence. The trot was super expressive, to the point where he was being rushed and lost the rhythm between B and E. However, the elasticity Imperio has in this gait is incredible. The judges awarded it with a 9.2. The walk was ground covering and rhythmic (8.7) and the canter uphill (8.2), but the horse could have had more flexion in the hocks and Fiebelkorn had to give more half halts with the bit to keep the horse totally through the body. Judge Plewa commented on the changing contact with the bit towards the end of the test, which led to the 8.0 score for submissiveness. The overall impression was very good, nevertheless, and scored 8.8. Total: 8.58.

Fiebelkorn and Imperio's partnership is also brand new but led straight to success. "I have him in training since the beginning of 2008. I saw him at the 2007 Trakehner Championships where I was invited as a guest judge rider. Straight away I scored him 10 for rideability," Fiebelkorn said. "I was totally crazy about him and got to ride him for his owner, Mr. Poll of Gestüt Hörum. I have so much fun with this horse." Imperio was the reserve champion of the Trakehner Licensing and partly sold by Poll to Schwaigänger. 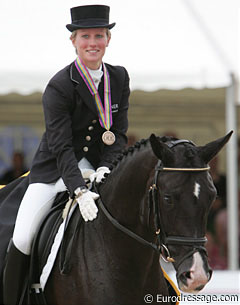 Helen Langehanenberg and Silberaster OLD were seen by several people as the winner of the class, but the judges were quite right in their assessment and commentary on the black Oldenburg mare by Sandro Hit x Canaster. Silberaster probably has the best gaits of all 5-year olds at the Championships, but in the Finals test, she was not really in front of the leg and needed the aids of the riders to carry herself through the test. Furthermore, she was a bit distracted by the stallions passing by behind the ring and whinnied at them in response to their neighing. Langehanenberg had her hands full with the gorgeous black mare but was able to present a pretty picture. Silberaster trots with such an amazing expression. She is long legged, big framed, elastic, powerful, engaged; all the ingredients for a dream mover. In walk, she covers ground but could have stridden with more energy. In canter, she makes huge uphill strides, but lacked some collection in the test, which resulted in simple changes which were a bit on the forehand. Silberaster scored 8.5 for trot, 9.0 for walk, 8.4 for canter, 8.3 for submissiveness and 8.5 for general impression. On another day, the scores for trot and canter could have been higher, but not today. The overall score of 8.54 was acceptable and so was the bronze medal.

Langehanenberg, who is also the world champion aboard Damon Hill NRW, expressed her joy over the bronze medal. "The last few years have been really good. Everything worked out really well. I won with Damon Hill, I qualified Responsible for the Nurnberg Burgpokal Finals and now Silberaster. It can't get any better than that," she said. 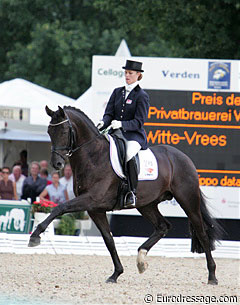 Silberaster has been in training with Helen for little over a year. She became Regional and National Young Horse Champion with her. The mare was used for embryotransfer last year and had three foals this year by Rosario, De Niro and Fidertanz. In March 2008, Silberaster had a hormone treatment again to get flushed and three embryos were inseminated with semen of Dressage Royal and Belissimo M. Owner Ludger Bührmann returned her to Langehanenberg's stable in April. The next big competition on Silberaster's show schedule are the Bundeschampionate in September.

The Dutch duo Madeleine Witte-Vrees and the KWPN licensed stallion Wynton slotted in fourth. Sired by Jazz out of Acacia (by Matador II), Wynton was a totally different horse in the finals test. The trot was very expressive and much more ground covering than in the preliminary test. His front and hind legs were really reaching forward moving uphill while the position of the head was ideally on the vertical. At a certain point, the trot was ridden so big, that it became a bit too quick. In walk, Wynton moved with much energy but could have bit slightly more clear in the rhythm. The canter was well balanced, even in counter canter, but the final transition to trot was too forward and Wynton made a transition while tossing up his head. The judges were equally pleased with the massive progression the black stallion had made. They favoured the canter for its engaged hind leg (8.8) but remarked that the horse should be looser and more swinging through the back. Though Wynton is moving actively with his legs, it is true that the back usage can be optimized.