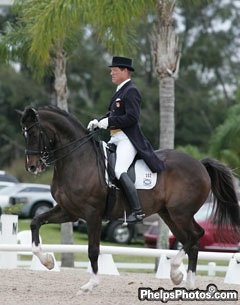 Right before the official depature to Hong Kong, the American Olympic team riders suffered a setback due to the withdrawal of Leslie Morse and Kingston as reserve team combination. During quarantaine in Aachen, Germany, Morse's KWPN stallion Kingston (by Voltaire) was found unfit and could not fly to Hong Kong for the 2008 Olympic Games.

Morse has been replaced by Michael Barisone on the Mrs Suwalsky's KWPN bred gelding Neruda (by Haarlem). The U.S. Olympic dressage team consists of Steffen Peters with Ravel (by Contango), Debbie McDonald with Brentina (by Brentano II) and Courtney King with Harmony's Mythilus (by Ferro).

Photo by Astrid Appels for Phelpsphotos.com