Werth Marches to Freestyle Victory at the 2008 CDIO Aachen 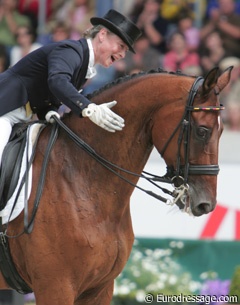 Isabell Werth won the CDIO Grand Prix Kur to Music at the 2008 CDIO Aachen in Aachen, Germany, on Sunday July 6, 2008 and became the Aachen Dressage Champion for the fifth time in her career. Winning all three CDIO classes, Isabell Werth outshone all competitors looking ready for the 2008 Olympic Games.

Satchmo and Werth grew in the competition performing more strikingly each day. They looked fitter and more harmonious with each footfall. Her freestyle ride, however, was atypically strewn with faults. The bay gelding broke into canter before the right half pass in trot. Satchmo's trade mark movement are his immensely scopey half passes in which the moment of suspension seems to last forever and the legs cross to unprecedented lengths. The left pirouette could have been more forward. In the highly technical movement of two tempi's on a half circle followed by one tempi's on a diagonal, Werth lost count and made a mistake in the transition from two's to one's.

The rest of the test, though, was astonishing. Great extensions, lovely piaffe and passage moments and the steady, soft contact with the bit was never lost even when those mistakes were made. They managed to score just above 80%: 80.150%.

"I have been focusing on the Grand Prix and the Special lately and haven't been practising the freestyle much," Werth confessed. "The mistakes were made because the movements came as a total surprise to Satchmo."

The 38-year old Isabell rode to a recomposed version of her "March with Me" freestyle. Her symphonically orchestrated kur with music by Vangelis was originally filled with thrilling vocal arias by soprano Montserrat Caballe adding a unique dramatic effect to her kur. After the 2007 European Championships, 'some' judges told her to get rid of the vocals because it was "too much." The result now is a freestyle with something missing. The symphonic sounds are captivating, but there is never a moment of envigorating suspension or emotional release; moments which were originally triggered by Caballe.

It's a pity that the world's two best riders, Isabell Werth and Anky van Grunsven, are currently riding to two lukewarm, unmoving musical freestyles. Not a good way to go to Hong Kong! Fortunately, the high degree of technical difficulty in Werth's freestyle partly makes up for what is missing on an artistic level.

"We have altered the music from last year, since we received a lot of criticism that it contained too much singing. Originally it comprised of Vangelis melodies, but now it has been completely recomposed. The voice sounds more like an instrument now," Werth explained. "I hope that we can repeat our form at the Olympic Games as well, because Satchmo is going to have a short break before I prepare him for Hong Kong." 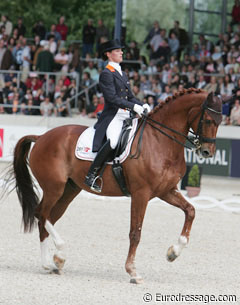 Dutch Adelinde Cornelissen placed second for the third time during the Aachen show week. Aboard Parzival she showed gorgeous movements, but her ride could have been executed more to perfection. The first extended trot was not ridden to the fullest, the pirouette left should have been more forward and when Cornelissen collected her horse, the half halts in his mouth were too visible by her leaning backwards and hanging into the reins. The piaffe and passage, however, were gorgeous and the flying changes straight and big. The suppleness and suspension of this horse are breath taking. The combination scored 77.500%, placing first with Dutch judge Fouarge and and fifth with German judge Riexinger.

"It is certainly no disgrace being placed behind Isabell Werth," the 28-year-old Dutch girl said. "Unfortunately, we didn't qualify at the trials in the Netherlands, because Parzival was very spooky. But he seems to feel comfortable here in Aachen and I'd certainly like to come back."

Adelinde's kur has an amateurish feel to it. Though she uses good catchy beats to mark the piaffe and passage, most of the sounds sloppily spill into each other and there is no storyline. If Cornelissen wants to play with the big guys, she needs to get her music up to standard. She has only performed her freestyle based on rock'n'roll melodies four times. "It is not too difficult yet technically speaking, but we will constantly increase the degree of difficulty," she commented.

Swiss Silvia Ikle finished third with the dark bay gelding Salieri. They scored 77.350% which was justified. The piaffe and passage were the highlights of the test, performed to perfection in rhythm, regularity and relaxation. The pirouettes could not have been any smaller, but could have had more jump and lift in the shoulder. The extended canter lacked some expression and in the extended trot, Salieri leaned into the bit. Though the contact is usually always light, Salieri repetitively flicks with his tongue. It doesn't hang outside, but in the kur it showed regularly on the right side of his mouth.

Ikle's music is delightful. The piaffe and passage are ridden to the greatest tango music and the straight one tempi changes on the centerline are executed on fun carnaval samba tunes. 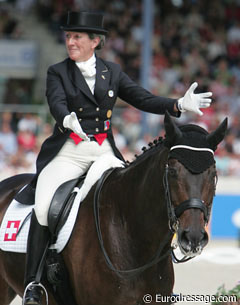 "Salieri presented himself in a solid form," Ikle said. "After a good Grand Prix, an excellent Special followed and today in the Kur he totally gave himself. I'm in very happy with the performances of my horse," Ikle added. The Swiss withdrew from Olympic participation in the winter 2008 because she believes the Games, the travelling and quarantaine procedures are too hard on the physical health of her horse. "It wasn't an easy decision to take, but I made it very consciously and in my opinion it was the right decision," Ikle added.

Finnish Kyra Kyrklund placed fourth with Max. Riding to Cabaret music, the duo made no major mistakes. Max was quite spooky at K and got tight in the neck. In the flying changes he swings his hindquarters too much to the right, but the tempi's are large and ground covering nonetheless. They scored 75.900%. In Hong Kong, Kyra will be competing at her seventh Olympic Games. She has participated in the Olympics non stop since the 1980 Games in Moscow.

Russia was this year partner of the CDIO Aachen and provided special performances during the break with Russian kosak dancers and cavalry riders. The Russian Alexandra Korelova rose to the occasion this year and placed fifth in the Kur to Music. Aboard her grey Orlov Trotter Balagur, a former police horse by Raskat, she climbed all the way to a

74.600%. No horse on the international dressage scene performs the piaffe better than Balagur. The hindquarters lowered, the nose at the vertical; this piaffe should score straight 10s with the judges, but usually gets scored 8s or 9s. Korelova trained with the late Georg Theodorescu and is now being coached by daughter Monica.

On Sunday evening at the CDIO Aachen, several nations announced their Olympics teams. The most anticipated announcement was that of the German Equestrian Federation: Germany will be taken Werth together with Kemmer and Capellmann to Hong Kong.

Text and photos by Astrid Appels/Eurodressage.com