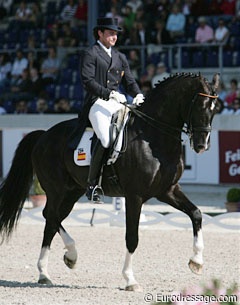 Spain will be represented in Hong Kong with a full team as four Spanish riders were able to qualify throuh individual ranking. Juan Manuel Muñoz and his Andalusian stallion Fuego XII (by Utrerano) were selected after the CDIO in Rotterdam.

It will be the first Olympics for Munoz Diaz and Domingo, Ferrer-Salat already two medals in the 2004 Athens Olympics with Beauvalais. It will be the first Games for her horse Faberge (by Falkland). Spain's reserve rider Juan Matute was part of the Spanish team in Seoul (1988), Barcelona (1992) and Atlanta (1996) and was the first Spanish dressage rider to participate in an Olympics.