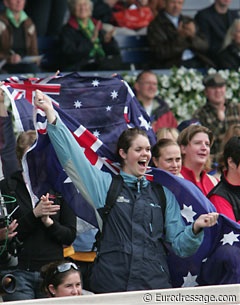 why the combination Heath Ryan-Regardez Moi are not considered for a team place despite its high (67%) scores achieved at the CDI-W Sydney for instance.

Hector wrote an editorial in The Horse Magazine that upset the EFA:

Once again we seem to have a situation in which the dressage selectors and the dressage high performance panel are prepared to put their egos and their power trips, in the way of selecting the best possible Australian team for the Olympic Games. And at a time when we have for the first time in Australia’s history, three combinations that have scored over 67% at international competitions. Yet, only two of those three are likely to be selected.

Kristy Oatley-Nist and Quando Quando have been preselected, and they have consistently scored 67 and better. FINALLY the selectors have woken up to what those of us just reading the scores in Australia could see – that Hayley Beresford and Relampago are on an up-curve and deserve a place in the team. They have even added her to the elite squad AFTER they scored 67.33% at the Lingen Selection event. 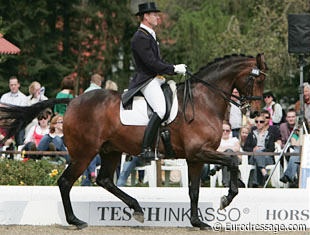 Now the likely third member of the team is Heath Ryan riding Greenoaks Dundee, although there is speculation that the EFA get Heath campaign, may result in Brett Parbery and Victory Salute getting the nod. This would be hard to follow. At the first selection event in Wiesbaden, Heath and Dundee scored 64.71%, while Brett and Sam scored 63.13%. At Lingen in the first Grand Prix, Sam scored 65.21% – 0.21 – in front of Dundee on 65%, but in the second Grand Prix, Dundee scored 64.861% to Sam’s 63.333%. On my maths that puts Dundee in front by 2.898.

But the truth is neither Dundee or Victory Salute have the performances as good as Regardez Moi. Because the selectors left Regardez Moi out of the Australian team at the Pacific Olympic qualifier, he and Victory Salute did not come head to head. Victory Salute scored 66.917% in the Grand Prix, against Dundee’s 64.708, but competing in the national class, Regardez Moi scored 68.75 from Minako Furouka – who just happens to be one of the judges at the Olympics. At the recent Sydney CDI, Regardez Moi scored 67.652% and yet another of the judges who will be at Hong Kong, Gotthilf Riexinger remarked that the horse should be in the Australian team at the Olympic Games. 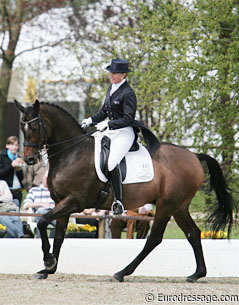 Oh but you can’t judge results in one competition against results in a different country. Really? That’s not what our selectors have been telling us for years – and not what they have done in this selection round either. The only possible way that Mary Hanna’s two horses, Rambo and Port Said could have been included in our selected group to compete at Wiesbaden, at the expense of Hayley and Relampago, is that selectors have based their selection on Mary’s score in Turin, Italy, with Rambo, and a score from Toowoomba, Australia, on Port. Yes a head to head contest is the best but it has been obvious to anyone watching Australian dressage that Regardez Moi has been in front of Dundee for at least twelve months now.

Gotthilf Riexinger is right. The team should be Quando Quando, Relampago and Regardez Moi. Regardez Moi could fly to Hong Kong on the same plane as the Australian based eventing horses. That bit is easy, getting the dressage selectors to listen to reason – that seems the impossible bit! 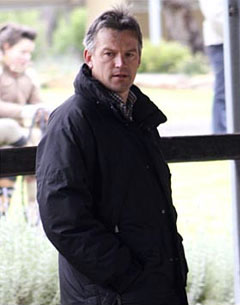 In yet another farcical twist, the EFA has announced that Ralf Isselhorst ‘will no longer continue’ to act as Australia’s coach. It’s an odd time to sack your coach with the Olympic Games less than ten weeks away, but then the sooner the better is perhaps the wisest course, when the best one Australian dressage official can come up with to support the controversial decision to appoint him in the first place was that Isselhorst gave wonderful no stirrups riding lessons to South Australian young riders. Great, we can spend tens of thousands of dollars importing someone to give basic riding lessons.I can think of a few South Australians who could do this quite as well.

In passing let us note that the rider who has forced her way into the team, Hayley Beresford received no support at all from the wonderful High Performance apparatus. Poor girl, no nutritionist to remind her to eat apples, or shrinks with video toys, or clinics with the recently departed Mr Isselhorst. No, she did it on her own with dedication and talent. The lesson? Let’s junk the whole sports administrator gravy train – and distribute what funds there are - and there would be lots more of them without the above, not to mention expensive trips to Europe for selectors and officials - to riders who prove they deserve it in the competition arena, and let them decide how to use it.

In the meantime, the selectors should open their eyes and see what is really happening, and make sure Regardez Moi is on a plane to Hong Kong.

Franz Venhaus of the Australian Equestrian Federation responded with the following article:

Getting Ready for the Games 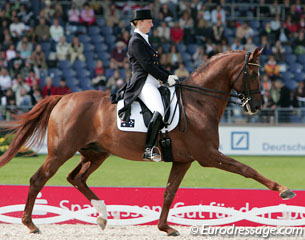 Around the world, sporting nations are in their final preparations for the 2008 Olympic Games, which are due to start on 08-08-08. Please watch out for the Olympic Equestrian Team announcements on our web. It seems, however, that it is "open season" already for commentators in some magazines to take a shot at selectors. As always they know all the whys and why nots, and always know better than the Selectors. More will come, I am sure, after the teams are announced.

I should mention that we publish nomination/selection policies and related documents on our web and also make their contents known by other means to the riders concerned. We need rules to have a "level playing field" for all concerned. It is a pity that occasionally, a rider fails to comply with or ignores requirements even after being reminded. Who bears the fault for the consequences of such failure to act? The EFA, of course.

I congratulate the Selectors, the High Performance Panels and all the other dedicated people that have been involved in helping our delegation get ready for the Games and for giving us their time and their skills. Olympic Games require an enormous effort, and Hong Kong seems to top the list right now as far as administrative complexity is concerned.

Chris Hector, who is currently at the CDIO Aachen for coverage, replied to the EFA's respons: 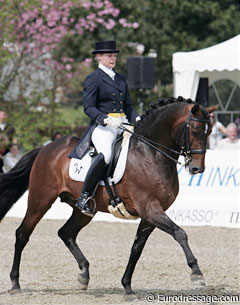 Usually, the EFA treats any criticisms raised by this magazine with a lofty ignore, so I guess I must have touched a particularly sensitive nerve with the editorial last month on the farcical refusal to consider Regardez Moi for the Hong Kong Dressage team, since it has produced a public response in the form of an emailed newsletter from EFA CEO, Franz Venhaus.

However it is a pity that Franz Venhaus takes the mealy-mouthed option of attacking ‘some magazines’ and un-named riders without actually naming which mag or rider, although it is pretty obvious from the comments that the magazine is THM and the rider is Heath Ryan.

Franz makes the points that these un-named commentators ‘as always they know all the whys and why nots , and always know better than the Selectors’, well thanks for the compliment… but it is true that I found it quite easy, without ever seeing Relampago do Retiro and Hayley Beresford in action, to ‘read’ the results from Germany and get the picture that the pair were on the up, and going to consolidate with some very good scores in the near future. There are very few surprises in the world of dressage, and if you get a feeling for the rhythm of the judges’ results, it’s not so hard to make this sort of prediction. Alas it seems it was beyond the powers of the selectors who – despite having traveled to Europe to view the action – left Hayley out of the team for the selection events. If the selectors find the idea of me tutoring them in the art of reading results tough to swallow, I can give them the names of at least half a dozen people I know in Australia who have mastered the art who I am sure would be happy to help them out. 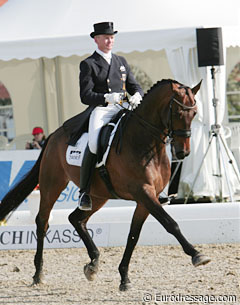 Part of the problem seems to have been the criteria themselves, which apparently specified that only the scores of OI judges were to be taken into account – thus when one OI judge at Turin gave Rambo a whopping score while the other four judges had him on the 60 mark, that horse presumably qualified first for the selection trial squad with that one slightly loopy score, despite having a string of poor results in other events – squeezing out Relampago who had a solid string of good results but with no single result as high as the one Rambo got in Turin.

According to Franz, “We need rules to have a "level playing field for all concerned”. But how can that be when the selectors decreed that Kristy Oatley-Nist was pre-selected and did not have to attend any selection events? Half level is a bit like being a little bit pregnant. If the selectors can make the quite reasonable decision that Kristy should be in the team without going to the trials, why can’t they also make the reasonable decision, that based on all the evidence of the past 18 months, that Regardez Moi would be a better candidate for the team than Dundee. Holy smokes, they might even ask the rider which horse he would prefer to take!?!?

I am assuming that Heath Ryan and Dundee will be named in the team, since the results at the selection events would indicate this – the only way he might be left out is, as happened after he WON the selection event for the last WEG, if they discover ‘veterinary’ grounds for Dundee’s omission. 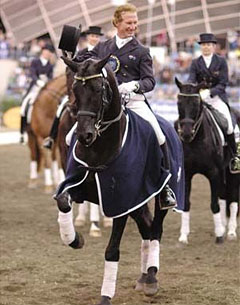 So if it is Heath on Dundee v Heath on Regardez Moi, we are not talking about another rider, on another playing field, but about Heath and his two horses, and the selectors should have had a good look at the two combinations in action even with the EI interruption (they can’t have slept in and missed all that many tests…)

Are we back in the days of Sir Alec Creswick who even when the Australian Ambassador in Dublin tried to make him see reason, and include John Fahey (who had just beaten the future gold medalist) in the showjumping team, sat in the stand saying it was time to ‘teach the boy a lesson.’ Is the EFA still in payback mode because Heath had the temerity to put his side of the veterinary situation with Dundee after the last WEG?

It’s nice that Franz Venhuas congratulates the dressage selectors and the high performance panel, they are not going to get any applause from anywhere else in the Australian equestrian world…

The Australian Dressage Team will be named on July 4, 2008

Feel free to respond to this discussion by mailing Eurodressage or by discussing this topic in the Eurodressage Social Community of Barnmice.com