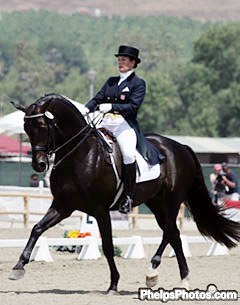 Small Tour - Round 2 - Intermediaire I

Gibson and Harding continued their close contest in the U.S. Intermediaire Dressage Championship. The top three placings did not change in the Intermediaire I Dressage Championship. Michelle Gibson continued to demonstrate the strength of the developing side of the U.S dressage program by reinforcing her lead with Don Angelo with an impressive test and a score of 72.55%. “I really rode what I felt was there,” said Gibson. “He felt a little tired in the warm up and he came in the ring and had a little more energy. I was really happy how he responded to the crowd, gives him a little lift."

The Wellington, FL pair have a sparkling resume including the 2007 USEF National Developing Horse Dressage Championship for 7-9 year olds. The now 8-year-old Oldenburg stallion showed maturity beyond his years through out the test today and stayed ahead of his arch rival (and reserve champion in the Developing Horse Championship last year): Come On III. Come On III, ridden by Shawna Harding, is more experienced than the lightly shown Don Angelo having won 10 classes in Florida this winter. He is incredibly consistent and Harding and Gibson are very good friends and help each other regularly, despite the fact that they are fierce competitors.

Small Tour - Round 3 - Intermediaire I Kur to Music

Michelle Gibson’s lock on the USEF U.S. Intermediaire I Dressage Championship never looked in danger today once she set foot in the arena to perform her freestyle with Don Angelo. The 2007 USEF National Developing Horse Dressage Champion for 7-9 year olds demonstrated unbelievable maturity throughout the weekend earning a score of 76.400% in his final effort, giving them a three-day score 72.898%. Read Full Article with Photos.....

The American Young Adult “Brentina Cup” Dressage Championship started the day off and first round winner Adrienne Lyle rode Wizard into the ring to start the division. The 23-year-old from Ketchum, ID rode another stellar effort on the 9-year-old Oldenburg gelding to take the early lead with a score of 68.683% and never looked back. Averaged with yesterday’s score from the USEF Brentina Cup Test, Lyle and Wizard finished with a two-day average of 68.265% ensuring a clear win in the Championship. (Read Full Article with Photos) 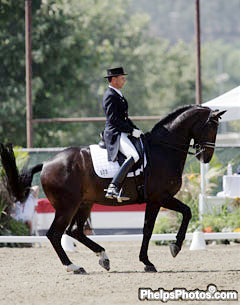 Steffen Peters rode Ravel to another win in the third leg of the USEF National Grand Prix Dressage Championship (which also serves as the Olympic Selection Trial) with a score of 75.25%. In a test highlighted by powerful passage, fluid changes and excellent transitions, Ravel continued to show class beyond his years. Owned by Aikiko Yamazaki, Ravel has been undefeated in 2008 and doesn’t look to be in danger of breaking his streak. Peters will ride a new freestyle tomorrow with Ravel, he hopes that his winning roll will continue.

“Again I’m very, very happy with Ravel,” said Peters. “Every single second there was relaxation and suppleness. It went so well I just trusted him a little too much in that last piaffe, but I’m just beside myself. He’s just there where I want him for tomorrow,” said Peters. “He was very relaxed today and this is the first time I will try the new freestyle at a show. I’ve tried it many times at home of course. But this will be the very first time at a show." 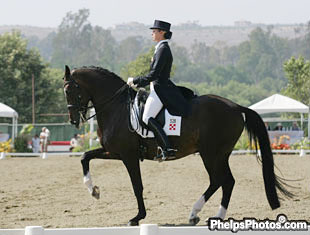 Peters felt the pressure for the first time this championship, as Courtney King-Dye and Harmony’s Mythilus put in their best performance yet to slip right behind Peters on a score of 75.20%. King held nothing back and the 14-year-old Dutch Warmblood gelding delivered.

“Myth was a little tired, sleepy tired, this morning,” said King-Dye. “The heart that horse has, I had tears coming down my face after the test and then when they announced the score. Myth just has a heart of gold. He pushes through anything that he’s feeling, he wants to be so good. I stayed on course and was able to get a good score. I guessed that this week would be better than last week,” said King-Dye. “Last week I was a little conservative. I couldn’t let his neck out and trust that I could go for it in the extensions. Today I could and I could go for it more and trust that I was not in the passenger’s seat but in the driver’s seat.”

Peters said that this was the first time ever that two American horses had scored 75% or better in a Grand Prix.

Debbie McDonald and veteran Brentina proved that they are as consistently brilliant as always. The 17-year-old mare delivered another stellar effort for a score of 73.042% to finish third by a wide margin. McDonald had a couple small mistakes in the test which she took responsibility for. “I think the piaffe passage tour was great,” said McDonald. “I made mistakes personally myself where I shouldn’t have. So I’m a little mad at myself but I couldn’t be happier with her. She feels so fit and so clear. Its just amazing.”

Steffen Peters and Ravel were crowned  U.S. Grand Prix Dressage Champions (aka Festival of Champions) and won the USEF Olympuc Selection Trials for the 2008 U.S. Olympic Team in Dressage with a spectacular performance in the Grand Prix Freestyle. The pair finished first with a remarkable score of 79.500%. Read Full Story with Photos.....

Day one of the U.S. Festival of Champions was highlighted by the afternoon performances of the 12 best horses in the country competing in the Selection Trials for the 2008 Olympic Team in Dressage. Serving also as the National Grand Prix Dressage Championship, the class featured four Olympic veterans. San Diego rider and Olympic veteran Steffen Peters had plenty of fans on hand to watch him ride his two horses, and his new star Ravel proved to be the class of the field, winning his fifth Grand Prix in a row with a fantastic effort and a score of 75.792%. “I was beside myself,” said Peters after his test. “It adds a lot of pressure when you’ve had a good season. There were areas that I took a little more risk with Ravel and everything came together on the right day. It’s an Olympic year and you have to raise the bar, if you jump it that’s even better.” The 10-year-old Dutch Warmblood gelding’s test featured beautiful flying changes and transitions. Relatively inexperienced at the level, Akiko Yamazaki’s horse put the veterans on notice that he was going to be in the mix for selection. Read Full Article on Dressagedaily

Overnight leader Steffen Peters returned to the ring with Ravel in the U.S. Grand Prix Dressage Championship and made it quite clear that he was not going to relinquish his lead. Ravel took some of the much more experienced horses to task and never looked in danger of making a mistake. The elegant combination looked relaxed throughout the test with excellent changes and powerful extensions. They finished with a score of 75.240% “He’s so ready to work and giving 100% all the time,” said Peters. “After the last piaffe on the center line I got a little choked up. I don’t even think that this is quite where he maxed out. He is the kindest horse, it’s unbelievable.” 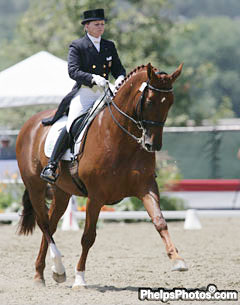 Debbie McDonald recovered from a disappointing test on her first horse Felix, to put in a fantastic second place effort on the legendary 17-year-old Hanoverian mare,Brentina. Owned by Peggy Thomas, Brentina, who returned to major competition earlier this year after a hiatus in 2007, continued to show her class and experience. The pair was second after the first day and improved her score in the Grand Prix Special finishing on 74.12%. “I did a little bit this morning with her to gauge her energy level,” said McDonald. “But she had a lot of energy this morning. I was very happy. I felt like I was a little less conservative. She just felt really right on my aids and energetic. For what I want from her right now I couldn’t ask for more. I’m extremely happy. My rides with Brentina at this point are really quite emotionalas she will retire next year so I can pretty much count the rides I have left on her,” said McDonald. “It is really quite emotional for me.”

Courtney King-Dye rode a convincing test on her rising star Harmony’s Mythilus. Fourth after the first day of competition. King-Dye and Mythilus had a beautiful test but went off course in one of the final movement to finish third on a score of 73.16%. “It’s so similar to the Grand Prix test, which is the test we usually ride,” said King-Dye explaining her mistake. “I’ve only ridden two Specials on Myth. And I just went for the extension in the wrong the direction.”