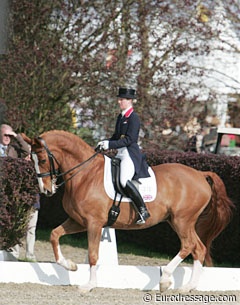 The British Olympic Association (BOA) today announced the three horse and rider combinations that make up the dressage members of Team GB for the Beijing 2008 Olympic Games.

A travelling reserve for the Dressage Team will be announced in due course.

The selected British dressage riders are ecstatic about their nomination.

Laura Bechtolsheimer said: “It’s very exciting, our whole season has been focused on selection but to have it confirmed still feels surreal, it hasn’t sunk in. Mistral Hojris is very special and I feel privileged to have a horse like him to take to my first Olympics. We have come a long way together and I feel confident that he will give it everything.”

Jane Gregory said: “I am in a state of shock! My goal this year has been to improve my riding and my training; we’ve been enjoying our international success so much and never dared to hope we would be in contention for an Olympic team position. I have ridden Lucky Star since he was 4 years old, he is an extraordinary horse and we are both preparing to give this all we’ve got.”

Emma Hindle said: “I am thrilled to be selected again to represent Great Britain. I have a great horse in Lancet and I am confident that we should be able to perform well in Hong Kong.”

Team captain Richard Davison said: “The selectors have given me a strong team to work with. All the riders work and interact extremely well together and both they and their back-up crews are now committed to preparing for every detail over the coming weeks. They have shown extremely good and consistent results throughout the season and I am confident we have a competitive team.”