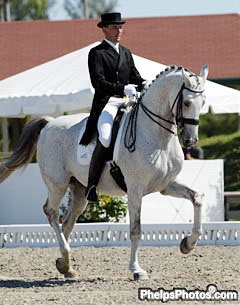 Lars Petersen is no longer in the running for a place on the Danish Olympic Dressage Team. The 43-year old American based Dane has withdrawn himself from Olympic contention because of unfeasible logistics.

Petersen was in the running for a Danish team place with his own 14-year old Danish warmblood gelding Success (by Silver Moon) but felt that the time schedule was too tight for his horse to comfortably settle down in Europe for the Danish Olympic selection trials.

"Succes is a very spooky horse and since the timing didn't work, we were only able to get one show in Europe before the CDIO Aachen [Final Danish Olympic Selection Trial] and didn't feel that was ideal," Lars Petersen's partner Melissa Taylor told Eurodressage. "Also, our other trainer,broke his leg, so that put a little stress on Lars leaving his business."

Petersen is based at "Five Star Farm" at White Fences in Wellington, Florida, where he trains, teaches and sells horses. Petersen and Danish team coach Rudolf Zeilinger agreed that the conditions were not ideal for them to come to Europe for the Olympic trials. Instead, Lars is currently considering competing at the 2009 European Championships in Windsor, GBR.